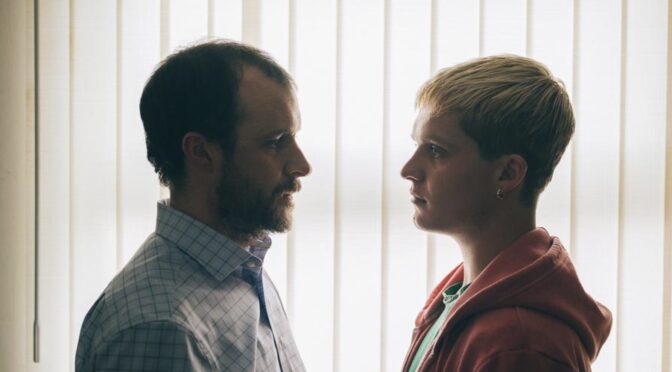 RIALTO unfolds like a movie version of a classic Irish ‘Misery Memoir’, much in vogue a few years back. Colm (Tom Vaughan-Lawlor) finds his life falling apart: his father’s just died, he and his wife Claire (Monica Dolan) no longer have anything to say to each other, his two grown-up kids treat him with indifference and – in his son Shane’s case – open contempt, and Colm’s long-term office job in the Dublin shipyards seems ominously precarious.

At this emotional low point, he finds some sexual solace in the arms, or at any rate the hands, of Jay (Tom Glynn-Carney), a blond teenage hustler who picks up Colm in a shopping mall. Confused and appalled at himself, Colm flees the mall toilets but leaves his wallet behind, leaving himself open to blackmail and the inevitable visit from Jay at his workplace. Soon after handing over a wad of cash, Colm finds himself fired: a Dutch conglomerate has taken over the company, and Colm’s job has disappeared.

In a striking scene (dynamically orchestrated by the composer Valentin Hadjadj) Colm walks out of the dismal prefabricated offices and climbs to the very top of one of the shipyard’s cranes, surveying a world that doesn’t want him. He’s already chucked bin-bags of his father’s belongings into the bay and now seems about to follow them into understandable oblivion.

But we’re only 35 minutes into RIALTO, the end of the first act, and it turns out someone does want Colm, or at least needs what he can offer aside from cash: Jay, who has a small daughter, a girl-friend reluctant to let him see the baby and an absent father. Though fuelled by rough sex in a no-questions-asked B&B and cans of equally rough Polish lager, a father-and-son relationship of a sort, bewildered and hesitant, develops.

Mark O’Halloran has opened out RIALTO from his stage play Trade (the same meaning but less glamorous-sounding), the two-hander turned into a well-written portrait of characters struggling to understand each other and their situation in life. Though undeniably bleak and centred on Colm and Jay’s sporadic relationship, the film’s casting gives excellent opportunities for actors in smaller roles to make the most of their moments: Eileen Walsh as Paula who calls Colm into the office to make him the unrefusable offer is both warm and a brick wall; while the estimable Ger Ryan has a memorable cameo as what used to be described as Colm’s late father’s fancy-woman. And Monica Dolan as Colm’s wife Claire takes what could be a one-dimensional suffering part and turns it into three: suffering and warmly sympathetic but also steely.

Indeed director Peter Mackie Burns has succeeded in getting strong performances from all his actors, especially Vaughan-Lawlor as the emotionally naked Colm. Adam Scarth’s photography captures Dublin with crystal clarity, though not one the Tourist Board would necessarily welcome: only one shot of a bridge over the River Liffey.