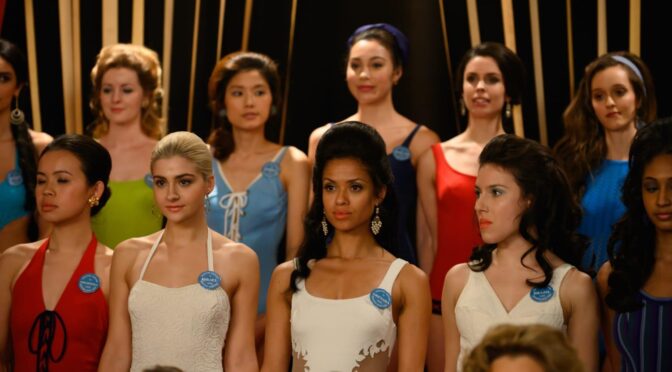 With its theatrical release cut short by the coronavirus pandemic, MISBEHAVIOUR has received a home release on Amazon Prime. It follows the true story of the infamous Miss World contest held in 1970, which saw protesters from the Women’s Liberation movement storm the stage with bags of flour. Their actions interrupted a world-wide BBC broadcast and left a flustered Bob Hope fleeing the stage covered in flour.

Like films such as PRIDE and MADE IN DAGENHAM, MISBEHAVIOUR follows the successful formula of adapting a true story of political strike-action and an underdog movement into a likeable feel-good comedy-drama.

Keira Knightley stars as Sally Alexander, a by-the-book mature university student whose status as a single mother raises eyebrows amongst her male academic peers and lecturers. Jessie Buckley also stars as Jo Robinson, a rebellious working-class spray-painter who is the complete opposite of Sally. Together, the pair hatch a plan to protest against the Miss World contest and thereby place the newly-developed Women’s Liberation movement on the map.

Founded by married couple Eric Morley (an unrecognisable Rhys Ifans) and Julia Morley (Keeley Hawes), the Miss World pageant contest became a flag-ship televised event for the BBC and was broadcasted with a lucrative global audience. Since then, the Miss World contest has been re-branded as ‘Beauty with a Purpose’ (not to be confused with the Miss Universe contest endorsed by Donald Trump).

MISBEHAVIOUR sees Eric and Julia Morley facing a crisis as they are fiercely criticised for the contest’s objectification of women’s bodies and its refusal to include women of colour. In order to boost their TV ratings, they controversially decide to include one black ‘Miss South Africa’ and one white ‘Miss South Africa’, as well as convincing American comedian Bob Hope (Greg Kinnear) to host the competition again. The film also sees several comical guest performances from Phyllis Logan as Sally’s strait-laced mother, who often quips disparagingly about her daughter’s non-traditional lifestyle, and Lesley Manville as Dolores Hope, who struggles to forgive her husband Bob’s wandering eye.

The core message of MISBEHAVIOUR is that, despite its sexist contradictions, the Miss World contest did indeed provide a platform for women of colour. Gugu Mbatha-Raw excels as Jennifer Hosten (aka Miss Grenada), who managed to subvert expectations by becoming the first woman of colour to win the contest in 1970.  The film firmly maintains that the Women’s Liberation protesters were not against the Miss World contestants themselves. Instead, they were opposed to the sexist objectification of women, and director Phillipa Lowthorpe maintains a sympathetic portrayal of the contestants by focusing on the racial divide between Hosten and her counterparts.

MISBEHAVIOUR is perhaps not the most overtly feminist film ever made, but it tells the true story of the Miss World protest admirably. It has a universal likeability, with an off-beat humorous tone which easily conveys its messages concerning sexism and racism to the masses.

One thought on “Misbehaviour”