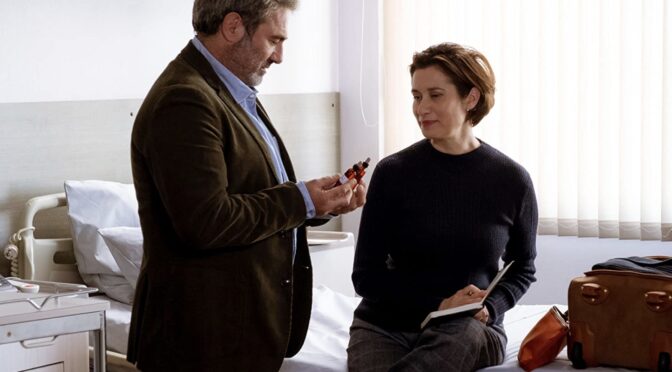 Scents can take you back to childhood, an old flame’s bedroom, or to the worst meal you ever ate. For Anne Walberg, her nose is her way of life. She’s hired to create fragrances that solve problems: transfer a smell from one place to another, hide a pollutant’s odour, or fix an unfortunate musk from a top-end accessory.

Played with commanding grace by Emmanuelle Devos, Anne is a lonesome control freak. In the case of her hired chauffeur, Grégory Montel’s Guillaume Favre, that means regulating his smoking habits and expecting him to help with changing the bedsheets. He’s just happy to have a job after almost maxing out the points on his driving license, while he looks for a bigger apartment to satisfy equal custody requirements. He’s taken aback by Anne’s expectations of him, which are more like a personal assistant. If it’s not acting as her scribe, she can be asking him to shoo away expectant admirers.

So like a French and fragrant GREEN BOOK, these clashing personalities hit the road. Anne goes from job to job, while Guillaume fits in visits with his daughter. In some ways, that’s PERFUMES. The beats are familiar for this kind of story – the inevitable change in the relationship between the two leads, the self-development both experience – but it has an undeniable charm.

Part of that charm is in how the film makes you physically feel. Sitting in quiet dimmed rooms, Anne shakes bottles of liquid, softly spraying them on testing apparatus before gently inspecting with her nose. We instinctually associate these sounds and motions with therapeutic places like hairdressers and salons, spas and beauticians. It softens Anne’s cold demeanour, imbuing her with a sensuality – or at least, equipping her with sensual behaviours – that make her feel both professional and comforting, despite lacking in interpersonal skills. And like the memorable haircut scene from BATTLE OF THE SEXES, or when Gerry fixes Woody in TOY STORY 2, these delicate movements might just trigger ASMR.

Anne and her nose could be the film’s central relationship. When the smell of a rest stop’s soap triggers an evocative memory, she asks to buy the soap. Barely tolerant of her agent and impersonally demanding of Guillaume, this moment of nostalgia shows Anne’s sense of smell to be her emotional window to the world. It is how she makes connections, to a fault: she identifies a waitress by a fragrance rather than how she looks, inattentive to any of her defining features other than her perfume. In her nose she has a refined tool – a tool which typically alerts people to pheromones, forming interpersonal and intimate relationships – but for Anne, it’s strictly for business and keeps her distant, stripping people down to their smells.

That close relationship with her talent could be because of the yips. In sport, the yips is a sudden loss of skill by experienced athletes. Anne is so in her own head because her entire life hinges on her ability to solve problems and produce solutions with her nose. What if she lost her sense of smell? It would mean losing the thing she’s good at, but worse, it would mean no longer being able to connect – with anything. Yet her precious attitude towards it, complete with rituals to reset her smelling palate, means she’s as restricted by it as she would be without it.

Balancing out PERFUMES with more naturalistic humanity is Guillaume, a man repeatedly dealt a bad hand. He fathers his daughter Léa how he thinks she wants to be fathered, instead of leading the way and sharing what he’s always wanted to show her. He’s limited by strict custody, his living situation, and a job he’s unenthusiastic about at best. He’s an everyman caught up with the eccentric Anne, whose discipline – itself imperfect – starts to rub off on him. Her firm belief in her capabilities is infectious, leading Guillaume to take control of his own life. While he is good company, he’s the less interesting of the film’s lead duo, someone to root for rather than lean in to close. But he does represent untapped talent; the sort found in people who are never able to show it off because they’re too busy working impossible hours to make ends meet. How many Guillaumes are out there whose potential is crushed by the weight of responsibilities? While Anne has a journey of self-development, Guillaume’s is more one of widened horizons.

The recent pinnacle for this kind of film, one built on a mismatched duo, remains THE INTOUCHABLES. PERFUMES isn’t quite as worldly, nor as heart-warming, but tactile scenes of bottles being skooshed do what only cinema can do; it’s as if you’re in the room, smelling those fragrances too, senses immersed. Devos is on to a winner with Anne, perfectly balancing the mixture of internalised anxious pressure with a steely exterior. With something to say about our relationship with our abilities, there’s more to PERFUMES than meets the, well, nose.