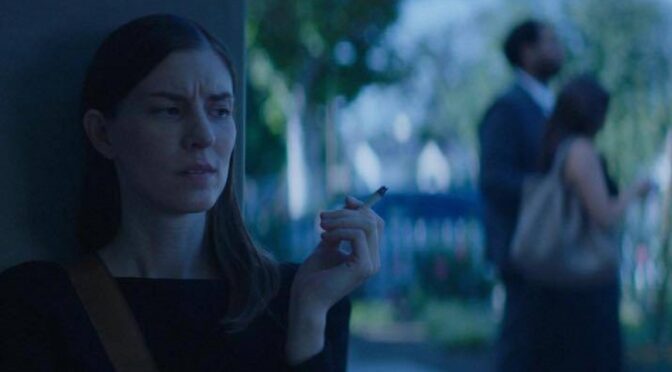 MY FIONA starts with a gripping long shot in which the camera rotates around Fiona (Sara Amini) and Jane (Jeanette Maus) living their everyday lives in an ordinary office. The camera stays on Jane working at her laptop while Fiona pops out for a moment and then, through the office window, we see Fiona committing suicide. This single shot – turning the ordinary and everyday into the tragically unexpected – is a confident start to Kelly Walker’s directorial debut, a bittersweet film about the juxtaposition of grieving and living.

MY FIONA is an understated first feature which was due to have its World Premiere at the BFI Flare LGBTIQ+ Film Festival. After Fiona’s unexpected and unexplained suicide, Jane comes to terms with her grief by babysitting Fiona’s son, Bailey (Elohim Nycalove), and spending more time with Fiona’s wife, Gemma (Corbin Reid). As Jane becomes more involved with Fiona’s family, we’re led to ask if Jane filling the hole left by Fiona helps or hinders the grieving process.

Despite the film’s heavy subject matter, there’s a very funny strain of humour throughout. Jeanette Maus does a great job of balancing the inherent lightheartedness of Jane’s character against showing Jane’s despair at the loss of her friend. MY FIONA benefits from Walker’s solid script, which has some wonderfully quotable lines (“Scientology is bullying in the form of religion.”). The humorous scenes of Jane watching babysitting tutorials on her phone and dealing with Bailey’s tantrums make the scenes of mourning all the more poignant.

Bailey becomes a lynchpin of the film as Jane becomes more of a mother-surrogate in the absence of Fiona. Through Jane and Bailey, the film contrasts the grief of an adult and the grief of a child. Although small scale, with the look of a TV drama series, MY FIONA deftly shows the complexities of mourning and, in particular, the process of discovery that accompanies it. Through getting closer to Fiona’s family, Jane discovers that she might not have known Fiona as well as she thought: her Fiona is not the same as Gemma’s Fiona or Bailey’s Fiona. Jane also discovers that she doesn’t know herself as well as she thought and there are some interesting allusions to identity and sexuality in the wake of grief which unfortunately don’t lead to the broader discussions or resolutions.

As Jane’s sense of identity starts to waver, the film also struggles to find its identity. After a confident first half, character arcs begin to get muddled, and the film’s heightened conflicts start to feel episodic, like cliffhangers in a TV show rather than conflicts driven by character. The narrative’s firm focus on Jane’s point of view sidelines Gemma and makes her portrayal disappointingly negative given the film’s otherwise sophisticated handling of suicide and blame. Despite this faltering, MY FIONA is a promising debut from Kelly Walker and a heartfelt film about the complexities of life and grief.