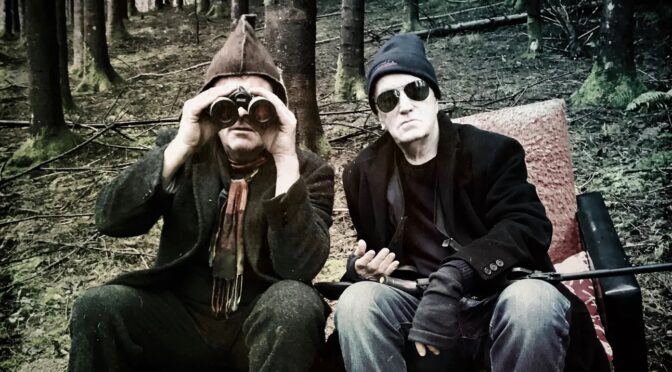 Andrew Kötting’s latest film, THE WHALEBONE BOX, is an abstract and beguiling psychogeographic documentary about the journey of a box. It is a surreal and dream-like series of images which may explore the psychic energy of a significant object, which may be a demonstration of the love of a father for his daughter, or, as the film suggests, it may be nothing but the shadow of the dream.

At its most grounded, THE WHALEBONE BOX charts the journey of a box made of whalebone from London to the island in Scotland where the whale from whose bones it was carved first washed up. The pilgrimage is formed of Kötting, psychogeographer Iain Sinclair, and photographer Anonymous Bosch. Along the way, they visit places of emotional and psychic significance, including woodlands, cemeteries, desolate fells, and creaky rural English gates.

THE WHALEBONE BOX is a surreal and abstract attempt to capture fluctuating psychic energies. It can be called a ‘documentary’ only in the same way that KOYAANISQATSI or Guy Maddin’s ostensibly non-fiction films can be called ‘documentaries’. At times, it resembles the essay-films of Laura Mulvey and Peter Wollen; at others, particularly those scenes of artist Eden Kötting, the staging is reminiscent of Derek Jarman’s play-like film, WITTGENSTEIN. The film is as elusive as the box itself.

The film’s handmade feel helps this oneiric sense. Similar to Mark Jenkin’s 16mm post-synced BAIT, you can see the work of handmade celluloid. Where BAIT used its scratchy images and imperfect sound in service of social realism, THE WHALEBONE BOX uses the low-fi technology to feel like a half-remembered dream.

The film’s energies swirl around the box: it’s an exploration of how the camera grants significance to objects through its gaze. Through a combination of Sinclair’s words and Kötting’s lens, the whalebone box becomes the origin and apotheosis of all boxes. The box shifts and transmutes into a coffin, an aeroplane’s black box, the box holding Schrödinger’s cat, Pandora’s box. There’s a horrific implication that the box is somehow the inversion of a living whale, with bone on the outside and calm water on the inside. The box is in the film, and the film is in the box.

Despite this focus on an object, the most solidity in THE WHALEBONE BOX comes from its loving depiction of Eden Kötting, artist, director, and daughter of Andrew. Eden leads us through the film like Virgil guiding us through the dreamworld of the Divine Comedy providing meaning and context to the images before us. The film’s beauty comes from the sense that the director is ceding his view of the world to his daughter and allowing her to lead him. Through Eden’s eyes, the whale becomes a prehistoric leviathan, Iain Sinclair becomes a mysterious Man in Black, the box floats through the forest like a lost spirit, and the whole pilgrimage becomes but her dream. As powerful as the film makes the whalebone box — as imbued with psychic frequencies as it becomes along its journey — the significance of the object pales in comparison to the significance that the father gives to his daughter.