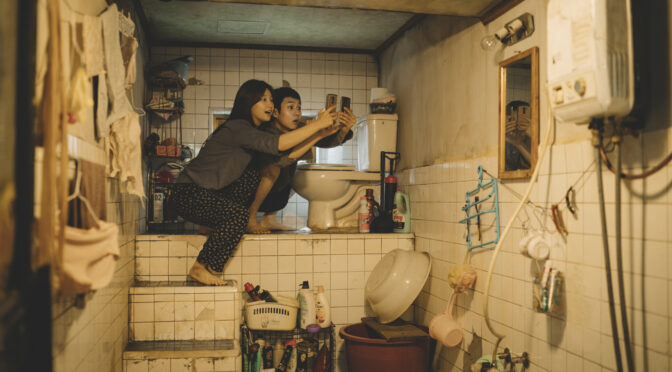 PARASITE is cinematically divine, with each shot crafted meticulously to convey an emotive message or subconscious emotion: every action is notably deliberate. Bong Joon Ho’s social satire explores class inequality in South Korea, as the poor Kim family stealthily infiltrate the picture-perfect life of the oblivious Park family as members of the household’s staff. However, even the best thought out plans don’t always come to fruition the way we expect. The staccato tempo of the film is elegant and refined, composed to indulge visual and auditory senses, and to delight the audience. The casting is impeccably brilliant and delivers exceptional performances all round.

The Kims’ abode is situated in the semi-basement depths of the city, with walls laced with grime and infestation. Their windows only just hit sewer level, accentuating the sheer poverty of the area. In a rather sickening contrast, the Parks live extravagantly in a gated beauty of a home, every inch of the building meticulously designed by the architect who once owned the place. Ki-woo (Choi Woo-sik) meets with an old friend who suggests alleviating the family’s financial pressures by taking on the role of a tutor for a wealthy family – the Parks. His new role leads to additional members of the Kim clan slipping their way into other staff roles in the family, including Ki-woo’s father, Ki-taek (Song Kang-ho), becomes their chauffeur and Ki-jung (Park So-dam) as an art therapist for the Parks’ youngest child. But how much is getting in too deep, how far do we go for our family? PARASITE is deeply eccentric, splashed with surprising bouts of ridiculous, engaging humour beneath the waves of a horrific turn of events.

PARASITE embodies, both thematically and visually, the juxtaposition of the severe class inequality in South Korea and how this is further impacted by the current climate crisis. The dramatic shift in weather has an unforeseen impact on poorer areas where lack of drainage occurs as the rich pave over every inch of their properties, resulting in flooding for those living in squalor. The lack of community is perpetuated through the sheer ignorance of the suffering of others, as the Park family look on from their glass-fronted patio during the storm, commenting on its beauty. Meanwhile, only moments away, hundreds rush to salvage their possessions downtown and take refuge in an overcrowded hall, soaked to the bone. In these moments, when the whole mood of the film shifts from humour to severity, these depictions of wealth become stark and haunting. In many ways, some of their parasitical behaviours seem inexcusable, but their desperation for survival surpasses sense and sensibility. The class warfare infighting looks almost inevitable, and its onset serves as a brutal reminder that the poor will continue to suffer as the divide increases, and suffer worse as a consequence. Bong Joon Ho perfectly captures the moment one turns to desperate risks but highlights the blurring of the lines when one goes too far, and cannot return from their actions.

“Every element of the film is thoughtful and considered – from the Kims receiving a scholar’s rock symbolising a ‘change’ in their fortunes to Ki-jung blowing fuzz gently from a peach in the most subtly sinister manner as the family hatch another plot.”

However, the socioeconomic elements are not the extent of the film’s complexities. Greed is also a core theme that runs through the film, and while it hinges upon class discrimination and wealth inequalities, it also delves into our own human greed. The Kims push their luck too far, and with fear of losing their new lifestyle, panic sets in. Yet the Parks face the consequences of their greed; they are oblivious to how other people are living, exacerbated by their out-of-date perspectives on the world (including encouraging their son’s obsession with Native Americans, ignorant to the cultural appropriation and negative stereotyping). Every element of the film is thoughtful and considered – from the Kims receiving a scholar’s rock symbolising a ‘change’ in their fortunes to Ki-jung blowing fuzz gently from a peach in the most subtle and sinister manner as the family hatch another plot. The viewer is brought along for every suspenseful moment of the film, just as you begin to comprehend a profoundly tentative moment built upon the hopeful ambition of two younger characters, to the sharp tongues of the parents who have lived longer to accept the world’s harsh realities. The heartstrings are torn by the optimistic relatability of youth, the frustration at the coldness of the world, and our elfishness as a society.

Bong Joon Ho and the PARASITE cast have been lavished with praise – starting with being the first South Korean film to sweep up the Palme d’Or at Cannes 2019, to ending with six nominations at the 92nd Academy Awards. These accolades are no small feat for a foreign language film in a UK/US-centric voting ground – and indicative of Bong and his team’s exceptional talents. While some fear the acclaim is overhyped, PARASITE will leave you desperate to speak with others about an outstanding cinematic experience.

One thought on “Parasite”