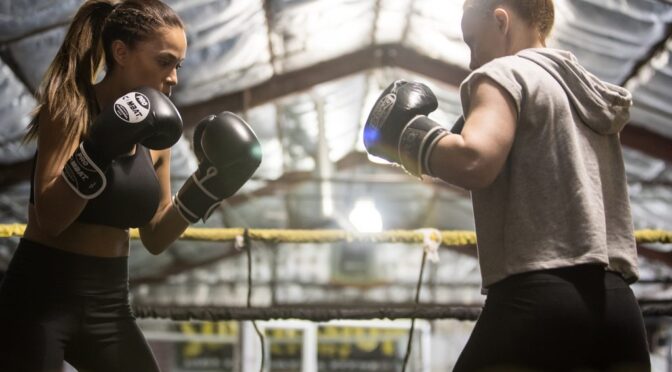 The sound of trainer hitting road begins our introduction to Bailey Kobe’s new film RAG DOLL. A gritty, nuanced drama depicts the struggles of an MMA trainee fighter, Nora Pheonix (Shannon Murray), as she gets battered by life while trying to batter it back. Caring for her sick mother, played by a wonderfully charismatic Stephanie Erb, Nora enters an MMA competition to scrape together some extra cash for medication.

The more we get to know Nora, the more we understand why her chosen outlet is fighting. With an unfulfilling job and some rather colourful and dangerous side hustles, the power and control she feels in the ring is something she can’t quite grasp elsewhere in her life. But in her world of MMA she’s still somewhat of a bottom feeder, acting as a “rag doll” essentially a human punch bag for a top-class fighter, Aisha (Roxana Sanchez). The film’s title permeates every aspect of Nora’s world; she’s beaten, pulled and put down in so many aspects of her life, tearing at the seams until she decides to do something to take her power back.

Coached by Rosheen, played by fifteen-time world arm wrestling champion, Dot-Marie Jones, Nora sets her sights towards beating Aisha at an upcoming competition. Director Bailey Kobe has identified a niche within a sub-genre often dedicated to men but sadly hasn’t been able to fill that niche in a way that is as substantial and as well thought out as it could have been.

Emphasising mental illness, prostitution and sex in the hope that these tropes will appeal to a different audience feels a little superficial and lazy, and the character relationships seem tenuous. In a film saturated with in-the-ring slow-motion shots, moody night-time jogging and the realisation that Nora’s fight was never inside the ring to begin with, it’s hard to see anything new here.

What shines in RAG DOLL is the relationship between Rosheen and Nora. Jones – an industry veteran and producer on the film – has managed to bring her own experiences to her role, which gives her scenes a sense of authenticity. There are heartfelt moments between the characters, which would have been great to see more of throughout the film.

There are glimmers of hope in RAG DOLL, threads that could have been followed and tugged at to reveal a much more well-rounded narrative but which were sadly left unexplored. What RAG DOLL has done is bring to the surface the potential of reforming and evolving a relatively restrictive niche genre that could lead to a brand new glimpse into the unexplored world of female MMA.