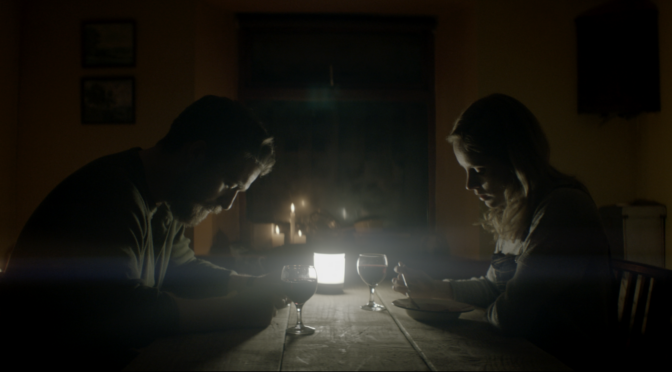 The new wave of female-directed horror films has gushed in this year with fury, and ROSE: A LOVE STORY, is no exception to this. Jennifer Sheridan’s debut feature is visually striking and deeply moving; a slow burn consisting of a sinister atmosphere, familiar horror tropes, and the true test of a marriage in the face of a terrifying illness.

Rose (Sophie Rundle) and Sam (Matt Stokoe), live deep within the woodlands away from town, choosing to keep to themselves and live a life of rationed foods, sourcing their own supplies and very much surviving off the grid. Yet there is something unusual about their existence. Their mundane, daily routine is common for people who work at home, but it centers around accommodating to Rose’s mysterious sickness. Sam mostly ventures out into the forest alone, while Rose spends her days avoiding the sunlight and subsisting on leeches that are ripe and brimming with fresh blood. Their mostly peaceful world begins to unravel after a series of violent events occur, that pushes their bond to the brink and threatens their very existence.

The film is unafraid of tackling ideas such as how illnesses can disrupt a marriage and make clear the fragility of life. It is not just a horror film, but a commentary on mental health and the isolation it causes.

It feels almost idyllic in many ways, this cabin for two nestled in the snowy Welsh forest, with minimal contact to the outside world and the sole pleasure of each other’s company. Yet the film highlights how this harmony isn’t a constant; they squabble over food preparations, and Rose’s anxiety manifests into an existential worry that Sam doesn’t see her as ‘beautiful’ anymore. But when confronted with challenges, they immediately fuse back into a united front. The film is unafraid of tackling ideas such as how illnesses can disrupt a marriage and make clear the fragility of life. It is not just a horror film, but a commentary on mental health and the isolation it causes. This is a painfully relatable situation for couples to face, as the dynamic within the relationship becomes uncontrollable and volatile and presents different challenges to Sam and Rose. Sam assumes a caring role for Rose and expresses his unconditional love for her, and yet she asserts the notion that he ‘didn’t sign up for this’ and feels guilt for the way he is also forced to adapt to this illness. Rundle and Stokoe are outstanding; the relationship is nuanced and delicate, portraying intimacy and loyalty resolutely in the face of terror. Olive Gray also gives a brilliant performance as Amber, a girl who the couple meets under unfortunate circumstances, who sharply mirrors the intensity of the atmosphere in the film. Definitely, one to keep an eye on in the coming years.

The relationship is nuanced and delicate, portraying intimacy and loyalty resolutely in the face of terror.

The sound design of the film is masterful, with sharp tempo shifts that keep you on the edge of your seat in anticipation. There is the frequent halting of sound, and use of silent stillness commonly heard in psychological horrors, but with a unique use of heartbeats that keep the pacing. The thuds are present when she lies on Sam’s chest, and when he’s staring at the sky, yet there is only one: inferring her animalistic senses, and the juxtaposition of the heart as a biological organ and representation of love. It is a perfect marriage to the isolated landscape of the film, where the stillness of the forest allows for the snap of a twig or howl of an animal to send shivers through you. The details and work put into this film are evidence of the passion of its creators: for the idea of empathy for someone with this monstrous-illness, and for how we disassociate with the ‘creatures’ or ‘evil characters’ in horror, without fully exploring the entirety of them being a person with feelings.

ROSE: A LOVE STORY is a refreshing story and a welcome one in the horror genre. It is unsettling, unnerving, and entirely unpredictable, which is what makes it so compulsive to watch. The strong engagement with the deep subject matter and well-crafted editing do it justice and demonstrates Sheridan’s deserved place in the London Film Festival.