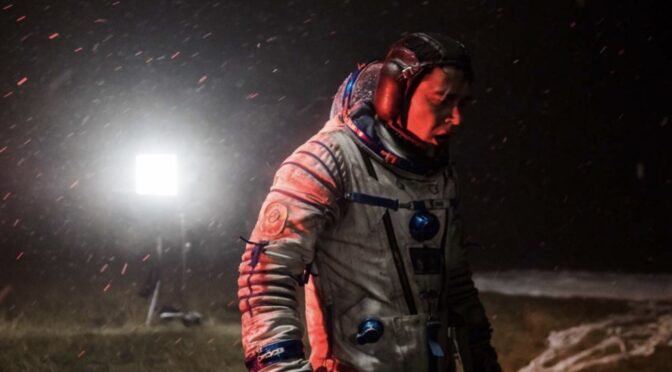 The opening scene of Egor Abramenko’s SPUTNIK is as promising an opening as any film. Two Russian astronauts in 1983 encounter turbulence on a routine mission in space, when they realise a creature is on the outside of their claustrophobic spaceship. When the ship returns to Earth with only one living occupant, Konstantin Veshnyakov (Pyotr Fyodorov), he is taken to a shady government facility in Soviet Russia and studied by neuropsychologist Tatyana Klimova (Oksana Akinshina). It’s an effective set-up, if not slightly by the numbers. What follows is a film that is muddled in its storytelling, and so unsure of itself that it results in offering little new to the sci-fi genre and generates no more scares than a standard schlocky horror film.

The film really begins when Tatyana is informed that it was not just Konstantin that survived the re-entry, and he has also brought back an alien that is living inside him, emerging each night as he sleeps. Cinematographer Maxim Zhukov creates an unsettling and bleak atmosphere, with a colour palette seemingly ripped from every other post-2000s sci-fi film – this isn’t a bad thing, instead elevating much of the film’s grim tone. Paired with its grinding, industrial score, peppered with harmonic electronic beats, the film has a lot of potentials to be unflinchingly unsettling. It attempts to approach the broader subject of the confidentiality of the Soviet government and manages to display an increasingly damning portrayal of Russia at the time.

Though the multiple plot lines feel wholly unnecessary and the overall message of the film becomes blurred in the blood and guts of the third act, there are a few shining lights in the dark. Akinshina and Fyodorov turn in wonderful performances, playing against each other in the film as doctor and subject respectively. Akinshina does what she can with the script, turning in a compelling performance as a doctor caught up in the mechanisms of Soviet ideologies whilst wrestling with the newfound information of extraterrestrial life on Earth.