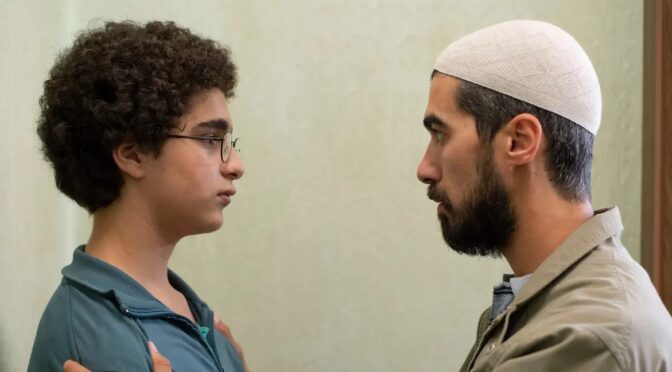 The Dardenne brothers’ YOUNG AHMED explores the mechanisms and influences that lead to religious radicalisation, through the portrait of a young schoolboy groomed by the extremist ideologies of his unstable father figure, and imam. While the character study at the core of YOUNG AHMED transcends the existential ruminations of loss and identity, the fragility of its political and cultural messages softens its social significance.

A young boy attempts to murder his teacher after the imam at his mosque convinces him that her conventional methods of teaching Arabic threaten to erase Islamism. While incarcerated he is forced to embrace his life, relationships and religion through a hazy battle between insight and indoctrination. Jean-Pierre and Luc Dardenne craft a compelling screenplay that flows with an equal measure of sensitive characterisation and social realism that follows in the footsteps of Nadine Labaki’s CAPERNAUM. Idir Ben Addi’s performance is memorable; he manages to incorporate the chaos of a young adolescent struggling to find his place in the world, adjacent to the forces of manipulation on a boy in the midst of his personal and spiritual development; there is a naturalism that makes us feel as if we are looking through a window rather than a lens. The Dardenne brothers’ character study is subtlety transitionary, with layers of complexity and worldliness that would compel even the most secular of viewers into an understanding of the pull of dark corners of radicalisation, but unlike Labaki, the underdevelopment of the plot itself dilutes the elements of social conscience it deeply strives to illuminate.

“While the character study at the core of YOUNG AHMED transcends the existential ruminations of loss and identity, the fragility of its political and cultural messages softens its social significance.”

YOUNG AHMED captures the raw emotional divide between the sense of self, and the turbulent uncertainty in the conflicting world of man-made ideological constraints, but fails to justify its selection of cultural canvas. While the characterisation, screenplay and tone begin to form the foundation for a captivating coming-of-age tale, the nihilistic backdrop confuses transgressive truth with ontological fallacy. At its root, YOUNG AHMED is a compassionate exploration of the components that drive vulnerable people to detrimental conditioning, but within its execution it fails to provide the substance required to navigate through the themes of radicalisation in Islam; at times it distorts the broad microcosmic metaphor, to evaluate a sector of religion and culture without showing the working to do so.

“While the characterisation, screenplay and tone begin to form the foundation for a captivating coming-of-age tale, the nihilistic backdrop confuses transgressive truth with ontological fallacy.”

Where YOUNG AHMED succeeds is the holistic messages we can infer from the timeless anthropological discourses that lie in the centre of the Dardenne brothers’ production: that we cannot compromise our humanity for an unstable ethos that has the power to warp it. YOUNG AHMED embraces the pain of adolescence and the difficulty to develop and understand our own identity within an ever-changing world; placing the issues of religious faith that can seem separate or alien to many, in a way that resonates universally. However, the end product condenses itself in a narrowing maze that many may end up lost in.

The Dardenne brothers perhaps ventured too ambitiously into some of the winding themes within YOUNG AHMED, but while some elements may have been slightly lost in translation, the core of the film entrancingly experiments with the coming-of-age formula of modern cinema. Above all else, it sparks thought and discussion about the borders we continue to build geographically and ideologically in a world where we all face the same struggles.