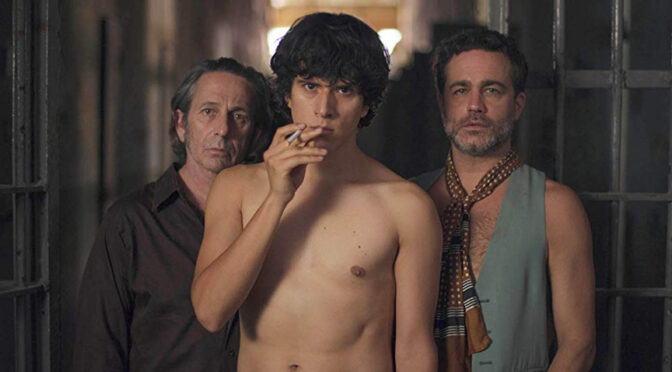 Director Sebastián Muñoz charts the rise of a narcissist among the homoerotic tension in a 1970s Chilean prison. Vicious yet tender, the film explores the forced connections and surprising intimacy among prisoners in quite literally a cutthroat world. THE PRINCE is screening at this years’ Amplify! Film Festival.

Claustrophobic cells, cold and grimy walls, various limbs draped over one another as their owners are forced to share thin, hard mattresses – it’s not difficult to see why these men cry out for moments of pleasure or affection, even if largely achieved through horrible means. Fostering their own community through a hierarchy established around sexual favours, prisoners cling to one another in a desperate display of loyalty. Show respect or be prepared to face the consequences. Imprisoned for murder, Jaime (Juan Carlos Maldonado) quickly becomes the prized possession of older, domineering cellmate El Potro (Alfredo Castro), better known as ‘the Stud’.

Despite the surrounding squalor, Jaime appears to have lucked out. He may share a cell with four other prisoners but there are several home comforts to be found, no doubt due to the Stud’s high standing among the inmates. They have done their best to transform a cage into a grotty studio flat, eating meals by candlelight and creating the pretence of family. There’s the early ritual of showing the new guy the ropes as the Stud takes Jaime on a tour of the grounds, matter-of-factly ordering him around with a quiet assertiveness but still possessing a measure of sympathy. Come nightfall, things take a stark if inevitable turn, when Jaime is forced to have sex with his new ‘mentor’. Shot in closeup with natural lighting, Jaime’s face is barely visible, consumed by shadow with only specific body parts illuminated, enhancing his fear and uncertainty and making the scene both powerful and incredibly uncomfortable to watch.

It is not long before Jaime adapts to his new role as the Stud’s ‘prince’. By giving this man his body, Jaime receives gifts in return, and soon grows accustomed to the perks of being this influential prisoner’s lover. His vanity becomes overtly apparent, comfortable with his looks and enjoying the admiration of his fellow inmates. Protected by the Stud, he goes about his days with a newfound confidence, frequently admiring himself in the mirror and shooting a smug smile to those who look his way. His dark mop of hair and toned physique liken him to BOOGIE NIGHTS’ Dirk Diggler, sharing a rather similar trajectory of the solemn, tense boy who develops a chip on his shoulder; his arrogance entirely underestimating the real danger lurking within the dark, overcrowded halls. Gifted flashy clothes and styling his hair gives the illusion of someone who is untouchable but not even the Stud can escape humiliation from the guards. Shocking violence frequently forces this prince back to reality. Knife attacks involving semi-clothed individuals and a painful alternative use for a guard’s baton remind the viewer of the brutal violence which regularly occurs within prisons. Discretely shot for the most part, these savage moments keep the narrative on track, and help remind Jaime of the event which led to his current position.

Structural flashbacks tease an interesting story of familial affairs, self-discovery and extreme jealousy. These scenes work individually, however do not come together to create a cohesive or completely believable whole. Certain plot points are introduced then discarded, meaning Jaime’s crime of passion is never quite as convincing as it could have been. The script takes the approach that these characters have created a new life for themselves in prison, with Jaime especially gaining freedom from the sexual tension and relatively simple life he now has far away from traditional society. In this sense, the underdeveloped flashbacks are unnecessary and more time could have been spent fleshing out who these characters have become within the prison walls. This would have made Jaime a more likable protagonist – not a requirement perhaps, but the explanation for his crime detracts from his otherwise magnetic aura.

While the narrative is flawed, the lasting impression is overall a powerful one. Among the sex and horrific violence, there is a very real sense of affection which develops between the characters. This is largely due to the strength of the performances, with Castro instilling a surprising level of humility into a very troubling character. While Jaime’s struggles could be better explored, his transformation into the new Stud is well-reasoned, with a final scene reminiscent of Michael Corleone finally taking on the family business and letting his true nature reveal itself.