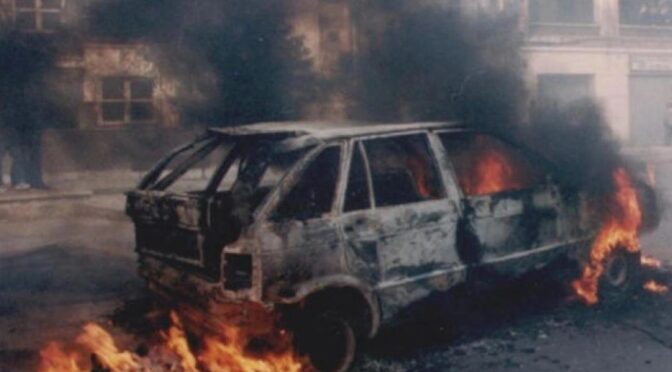 1992 was ostensibly a year of great optimism for Spain: Barcelona hosted the Olympics; Seville held a huge international Expo marking 500 years since Columbus reached America from its port; the European Union was taking shape in the Maastricht Treaties, which would help Spain to take its place in the world as a modern liberal democracy. All this came shortly after a fitful transition to democracy in the late 70s and early 80s, after decades of the Franco dictatorship had left Spain markedly underdeveloped compared to most of Western Europe. It was also in this year that in the southern working-class city of Cartagena huge industrial conflicts erupted in response to rapid deindustrialisation, with hundreds of strikes taking place, culminating in the burning of the autonomous region’s parliament building. This event is little remembered even in Spain today, let alone outside the country.

How did this contradiction of hopefulness and violence come about? THE YEAR OF THE DISCOVERY is an excavation of 1992, an art film that serves as an oral and visual history of the time, orchestrating a series of voices as they discuss past and present in a humble café somewhere in Cartagena. It is less like an archaeological dig than a disinterment. We don’t find fossilised artefacts here but living ghosts and an undead past. Speaker after speaker arrives over an epic three-hour runtime to discuss the problems of Spanish society, the experience of the young today, the precariousness of modern work, the testimony of an unsung struggle. At first, it is a bewildering cacophony of speakers. Still, the cumulative effect is a stirring polyphonic monument that speaks to both the specific fate of Cartagena while explicitly noting that this story has taken place everywhere in the West.

In form, THE YEAR OF THE DISCOVERY visually takes place via lingering Warhol-esque diptych split screens. As an audience, we can simultaneously see both a speaker telling their story, and also the café kitchen at work, or a lonely smoker from behind, or the listener sitting opposite the speaker – the collected mundanity of the setting. All are framed in tight close-up and medium shots, which feel slightly claustrophobic to begin with but eventually come to resemble the intimate and informal perspectives that one would have from an afternoon with pals at a greasy spoon. Both split screens are shot on magnetic Hi8 tape and in 4:3 aspect ratios, resembling TV news footage from the early nineties. Actual 1992 TV news footage and advertisement punctuate the film. Adverts, on one hand, offering a gleaming optimism and (with hindsight) an insincere slickness, while, on the other, news clips lay bare the brutal street fighting and riots between workers and police.

The film’s deliberate use of 1990s period-inflected visuals harks to Mark Fisher’s writing on Hauntology, or philosopher Fredric Jameson describing, in relation to postmodern culture in general, “a world in which stylistic innovation is no longer possible, where all that is left is to imitate dead styles in the imaginary museum.” THE YEAR OF THE DISCOVERY seems very self-aware of its haunting atemporality, seeming to take place simultaneously both in 1992 and 2020. Speakers sometimes talk as if the events discussed are current (to them, arguably, they still are), background noise from a TV delivers news of the Maastricht treaty while on-screen interviewees reference the Euro currency or the 2018 government of Italy, smashing a definite sense of time with anachronisms while reinforcing a fixed sense of place within the cafe. This non-time-zone articulates something very strange about our present time in a hugely interesting way: we are stuck in an ungraspable present. 1992 was also the year that Francis Fukuyama published The End of History and the Last Man, arguing that humanity had seen not just “the passing of a particular period of post-war history, but the end of history as such.” Here is a film which in its form seems to condense what it feels like to live here, at the end of history, after the great battles have seemingly already been fought.

THE YEAR OF THE DISCOVERY as a title feels like a wry comment on how, like the New World ‘discovered’ by Columbus in 1492 was ironically not quite a discovery at all – what became ‘America’ was, of course, already inhabited – but it was a discovery for those in Spain. What was discovered by the workers of Cartagena in 1992 was a new economic settlement already being recognised and felt materially in other European states. The rise of Neoliberalism, the fall of the USSR, and the crystallisation of the European Economic Area into the European Union (of which Spain was now integrated): a transnational restructuring of the capitalist economy was well underway, dramatically recasting relations that had existed between trade unions and the state for the decades since the post-war period. The new economic settlement was already decided and felt by other workers in Europe, now Spaniards would discover it for themselves.

We in the UK could draw parallels to events like The Battle of Orgreave, placemarks in recent history that seem to indicate something much larger and complex than just the event itself, moments that herald entire new eras. THE YEAR OF THE DISCOVERY takes some dedication from the viewer due to its length, which perhaps would be better experienced in a theatre for full effect, but its runtime ultimately feels necessary to give space to the almost endless articulations of how the micro of individual life relates to the macro of world-political-economy. We are here now after the discovery, but it doesn’t mean we understand what we’ve found.