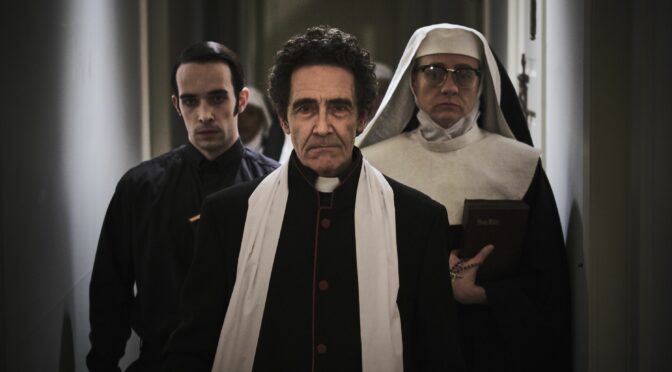 While not devoid of interesting characters or engaging relationships, AGNES is too disjointed to use them fully and not focused enough to explore them. Instead of employing a sudden narrative shift halfway through, AGNES would have been better served by having a little faith in its original premise.

Early on, AGNES hits all the marks for a standard exorcism film – we get an old priest and a young priest (in training) paired up to investigate a woman showing signs of demonic possession. The elder, Father Donaghue (Ben Hall), is a cynic and a sceptic, while the younger, Benjamin (Jake Horowitz), is just wide-eyed enough to believe. So far, a fairly standard setup.

Things get a little more interesting when it is revealed to Benjamin that Donaghue has been accused of child abuse and is due to be sent overseas to distance his crimes from the Church. This is a jarring twist, but not an entirely unwelcome one, as it seems to hint that AGNES intends to go beyond the typical jump scares of something like THE NUN, and explore the all too real horrors that hide in the shadow of piety.

Unfortunately, and bizarrely, this is pretty much the last time the subject comes up. The action quickly moves on to the afflicted convent, and the focus switches to Agnes, the nun showing signs of possession.

Here, AGNES falls into traditional exorcism territory, but this winds up being the film’s strongest point. The production design inside the convent is impressively detailed, with lots of dim lighting and looming shadows creating an effectively creepy atmosphere.

Similarly, performances are all on point in this section. The dynamic between Donaghue and Benjamin, while an over-familiar trope, works just as well as it ever has, and Hayley McFarland makes for an entertaining demonic host as Agnes. Her first outburst, in particular, is very funny, as she interrupts a quiet dinner with an explosive torrent of blasphemous abuse towards her sisters.

The plot also threatens to tackle more interesting material, especially as such a big deal is made of allowing Benjamin into the convent, despite him not yet being ordained. There is some excitement among the Sisters at his boyish good looks, but nothing more. The same happens with the introduction of Chris Browning’s notorious exorcist, Father Black. What feels primed to indict the performative spirituality of snake oil faith healers, or at least explore it, amounts to little more than a missed opportunity.

These interesting threads are dropped halfway through the film is the choice to follow Agnes’ best friend, Mary (Molly C. Quinn), as she leaves the convent to escape the trauma. This angle in itself is a compelling set-up, and Quinn portrays Mary’s turmoil well. Still, it feels like a completely separate film, or an overextended epilogue, and the pacing never quite recovers from the sharp turn.

That’s not to say that there isn’t some good material in the film’s back half. Mary’s creepy boss, Curly (Chris Sullivan), is more unnerving than any of the demonic horrors in the convent, and a developing relationship with a charming comedian, Paul (Sean Gunn), allows some exploration of Mary’s character outside of her faith. The problem is all of this feels too disjointed from the convent scenes to have any real impact.

The disparate threads are loosely tied together in the closing moments, with a conversation between Mary and Benjamin on what it means to have faith through adversity. This is some of the most compelling dialogue, but it comes too late for the overall plot and – like all of AGNES’s compelling ideas – it is passed over all too quickly.