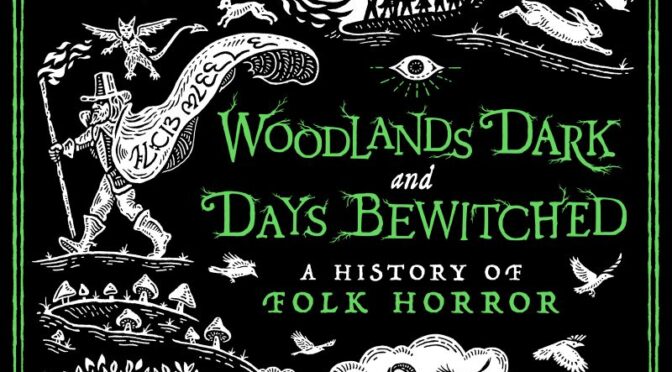 WOODLANDS DARK AND DAYS BEWITCHED: A HISTORY OF FOLK HORROR is an exhaustive and somewhat exhausting documentary covering all aspects of the folk horror subgenre. As well as surveying British and international folk horror cinema, the film also makes convincing arguments for reappraising how the subgenre has traditionally been defined and interpreted. While the length and academic density of WOODLANDS DARK AND DAYS BEWITCHED may not make it accessible for viewers new to folk horror, it’s essential viewing for anyone already lost in the dark woods, esoteric rituals, and ancient landscapes of folk horror cinema.

Folk horror in cinema originates with the ‘Unholy Trinity’, three British films from the late 1960s and early 1970s: WITCHFINDER GENERAL, THE BLOOD ON SATAN’S CLAW, and, perhaps most well-known, THE WICKER MAN. These films share a preoccupation with friction between the present and the past, with a shared consciousness somewhere in the land, and with aristocratic figures preserving ‘the old ways’. Interviewees tell us at the start of the documentary that folk horror is about “strange things found in fields, lights flickering in dark woods”, pre-Christian rituals, “the juxtaposition of the prosaic and the uncanny”. Director Kier-La Janisse takes us back to these origins through talking-head and archival interviews, film footage from a huge range of cinema texts, and poems recited over animated collages from filmmaker Guy Maddin.

Janisse is the author of House of Psychotic Women, the definitive text on the representation of female madness through thriller and horror films, and WOODLANDS DARK AND DAYS BEWITCHED is just as definitive for folk horror. The documentary is exhaustively researched, covering the origins of the subgenre outside film all the way to the contemporary folk horror revival through directors like Ari Aster, Robert Eggers, and Alice Lowe. Janisse goes back to literary folk horror forerunners like Eleanor Scott, Algernon Blackwood, and M. R. James through to television precedents in Nigel Kneale’s television plays and British children’s shows like Bagpuss and The Owl Service.

The film’s central thesis emerges in chapter four, where Janisse begins an extensive survey of folk horror from outside Britain to argue that folk horror is more than a series of British films and TV shows: the subgenre is about the friction between our past and our present across the world, particularly where colonial and gendered violence separates indigenous people from their land. Interviewee Mattie Do, director of Lao horror film DEAREST SISTER (ນ້ອງຮັກ), plainly states, “The future for folk horror is not any one country. I think the future for folk horror is seeing how diverse it can be.” There’s more discussion of non-European folk horror than an audience might expect with surveys of US, Australian, Mexican, Brazilian, and Israeli folk horror, among other countries. Outside of British folk horror, an audience might be familiar with Jaromil Jireš and Juraj Herz, but even someone who considers themselves well-versed in folk horror is bound to come away with a long list of films and TV shows on their watchlist. Janisse especially focuses on postcolonial countries and the displacement or genocide of indigenous peoples. The documentary broadens our understanding of folk horror as a subgenre that speaks to colonial and imperialist anxieties.

WOODLANDS DARK AND DAYS BEWITCHED also makes a compelling argument around the popular interpretation of folk horror, arguing that it’s a more subversive subgenre than traditionally acknowledged. Folk horror’s focus on the past and the rural often leads to conservative interpretations. Still, Janisse argues that these films are politically radical rather than reactionary in presenting the past as a threat. Her extensive range of films surveyed shows in folk horror films strong currents of environmental and anti-war sentiments, industrialisation unearthing what should not be disturbed, and clashes with forces of gentrification, colonisation, and invasion. Looking at the contemporary folk horror revival, Janisse uncovers the hauntological nature of modern folk horror and its interrelations with other politically subversive subgenres in psychogeography and the Urban Weird. Folk horror looks to the past but does so to think about how we fit into wider environments and how embedded we are in the land and in collectives, in ‘folk’.

At over 3 hours, WOODLANDS DARK AND DAYS BEWITCHED might not find an audience outside those already obsessed with folk horror, but it’s a real treat for those who are and, through Janisse’s strong arguments and exhaustive research, is an essential text in debates about the definition of this weird subgenre.