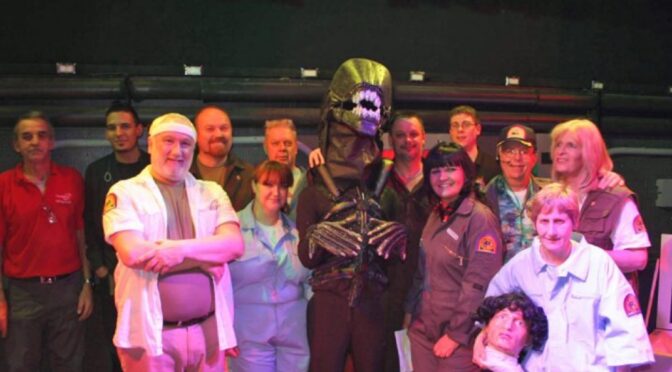 Cardboard versions of the USCSS Nostromo’s bridge consoles are stacked haphazardly in a box-room in suburban Dorset. Harry Dean Stanton’s iconic lines are recited in a West Country accent. A rubber Xenomorph facehugger is being pulled along on a string. ALIEN ON STAGE revels in these images contrasting Ridley Scott’s groundbreaking sci-fi horror film with the everyday nature of suburban British amateur dramatics and uses them to create a hilarious and uplifting documentary about ordinary people taking the creative opportunities that they’ve been denied.

Directors Lucy Harvey and Danielle Kummer were among the first outside Dorset to discover that the More Bus company crew had put on an amateur dramatics production of Ridley Scott’s ALIEN. After hearing about it from a friend and travelling from London to Wimborne just to see it, they not only set up a crowdfunder to get the production staged in London’s West End but started documenting the am-dram show’s journey from a village hall to Leicester Square.

Their footage has humour combined with a very British charm. That natural charm of the crew comes through, despite their apparent nerves and stress, and their innovative amateur solutions to ALIEN moments like the chestburster scene and Ash the android’s decapitation are terrific. In the final show, the corpsing and obvious special effects are part of the fun, creating a joyfulness around the whole production that makes you want to book a ticket as soon as these kinds of shows are possible again.

The core of the documentary is the contrast between the groundbreaking production design of the original film and the small scale of Paranoid Dramatic’s recreations of an interstellar hauling ship and a mysterious alien world. It would have been easy to exploit this contrast to look down on the crew with a knowing irony, but, instead, the film balances its sense of the ironic tension with real sincerity. ALIEN ON STAGE meaningfully engages with the enthusiasm of the working class British people putting on a show based on a movie that they love.

As we spend time with the crew, we get to see a group of people who were written off at an early age doing something they love and absolutely smashing it: Jacqui Roe, the charity shop worker and an aspiring actor playing a gender-swapped Ash; Pete Lawford, the talented prop master working to recreate H. R. Giger’s iconic Xenomorph out of polystyrene and string; and Dave Mitchell, the blunt and demanding ex-Army director whose quiet passion drives and motivates the entire show. The film reveals the incredible talent of these people, and we see the potential of people who weren’t given creative opportunities and who recognise the importance of stretching yourself creatively outside work. It makes for a beautiful documentary that’s far more substantial than its cardboard sets.