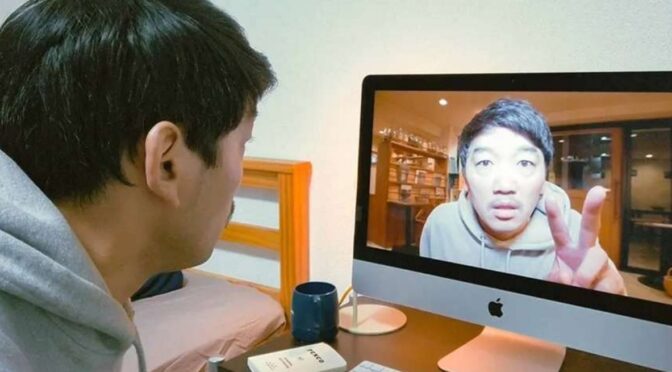 What would you do if you could communicate with yourself two minutes into the future? How would you use this tiny time loop? BEYOND THE INFINITE TWO MINUTES takes a clever sci-fi concept and fully explores its limits to the edge of complexity while never losing sight of the people at the heart of this time anomaly.

One evening, after locking up his café and retiring to his apartment upstairs, Kato (Kazunari Tosa) discovers himself talking to him from his iMac screen. But it’s not a recording: it’s himself from two minutes in the future speaking via the closed-circuit surveillance system hooked up to the TV in the café downstairs. After talking to himself for about a minute, Kato goes downstairs to the TV to talk to himself two minutes in the past. From this simple premise, complications bloom for Kato and his friends as they exploit this small time-loop and explore the unintended consequences of seeing into their own future.

BEYOND THE INFINITE TWO MINUTES uses its short runtime effectively to explore the implications of this two-minute time-delay loop while not falling prey to the contradictions and narrative inconsistencies into which this kind of narrative can get. Director Junta Yamaguchi and screenwriter Makoto Ueda have both impeccably plotted and timed the film and it’s wonderfully tied together through cinematography. The film is shot on an iPhone and structured as one continuous take, not unlike Sam Mendes’ 1917 and its two continuous takes. But BEYOND THE INFINITE TWO MINUTES makes better use of the single extended take format because the format ties into the concept of an ever-onward continuation of time and an infinite stretch of constantly seeing two minutes into the future. Rather than being a novelty, this cinematography and editing informs the film’s thematic concerns and serves the narrative.

Despite this high-concept sci-fi premise, there’s a joyous playfulness to the film. How Kato and his friends react to the “Time TV” feels natural and fun even within the sci-fi conceit. They do some tests and play around with themselves in the future to have fun with this strange phenomenon. This playful approach to temporal disruption – asking the question of what you can even really do with seeing only two minutes into the future – is more engaging than the self-seriousness of something like Shane Carruth’s PRIMER and has more in common with Max Barbakow’s recent PALM SPRINGS.

Yamaguchi ensures that the film remains accessible through a strong focus on the personal and, in particular, how Kato is impacted by the time anomaly that his future self forces into his life. Even as the narrative dives into the Droste effect and temporal paradoxes, the film never loses sight of Kato, who just wants to run his café and get a date with the woman who works next door. The film’s themes emerge as he starts to feel controlled by the future that he sees on his iMac and wonders if knowing the future actually means becoming constricted by the limiting of all your possibilities. As Kato says, “It’s pretty complicated, so please ignore it.”