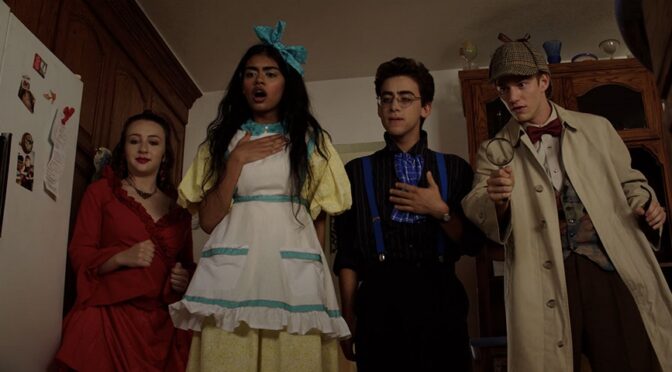 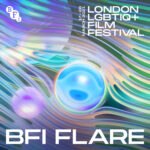 DRAMARAMA is a comedy-drama about the secrets within a clique of conservative Christian theatre-kids. The film has a real truth to how it represents the drama of puritanical Christian teenagers that unfortunately makes all the characters quite annoying. Focusing on Gene’s (Nick Pugliese) struggle to come out to his friends, the film presents a classic ‘it gets better’ story but it getting better involves your mean friends leaving town so you can be yourself.

Gene prepares for a murder mystery party at his friend Rose’s (Anna Grace Barlow) house to celebrate his friends going away to college. He’s nervous as he plans to tell his friends that he’s gay before they leave and knows that their conservative Christianity makes that a risk to their friendship. As the party continues, the friends are tested by secrets coming out and gaps developing between their views and beliefs.

While the murder mystery is underway, the film’s opening is bolstered by snappy editing, Dutch angles, and a dynamic camera capturing some of the energy of Jonathan Lynn’s murder mystery boardgame adaptation, CLUE. Gene’s subdued demeanour contrasts with the high energy of his friends as they improvise skits, throw around ‘90s pop culture references, and riff off one another. This contrast between high energy moments and subdued, awkward tension structures the film as the party alternates between the friends having fun and then sniping at one another. Every moment of fun seems to be followed by someone taking a joke too far, which precipitates several minutes of tension while secrets come out and the complex histories between the group’s members affect everyone at the party.

There’s real truth to how DRAMARAMA represents its evangelical Christian young people: a subculture that’s not often seen on screen but may be familiar to adults who passed through school in the 1990s. The issue with depicting conservative Christian theatre-kid teenagers with any degree of verisimilitude is that conservative Christian theatre-kid teenagers are annoying. While their constant swinging between improvising and being mean to one another might be relatable and charming to a teenage audience, it became tiresome after an hour. As an accurate representation of a tense and awkward party between repressed teenagers, the film itself becomes awkward to watch.

Gene’s struggle with his sexual identity should be the heart of the film but is sidelined by issues like Oscar’s (Nico Greetham) UCLA scholarship, Claire’s (Megan Suri) crush, and Ally (Danielle Kay) bickering with Rose. The film is at its most interesting when it’s exploring how the group judges Gene for his lack of belief, or when Ally confronts Rose for using theatre as an escape from reality: when the young adults are facing up to the potential harshness of the world beyond their small town and how their uncompromising Christian beliefs rub up against the wider world. But this idea is underexplored to the extent that we’re left wondering why Gene wants to retain these friendships. The friends are mean to each other in that way peculiar to teenagers, and we’re left feeling that Gene will absolutely be better off without his judgemental Christian friends. Without them in his life, he might express who he is and meet new people who accept him.