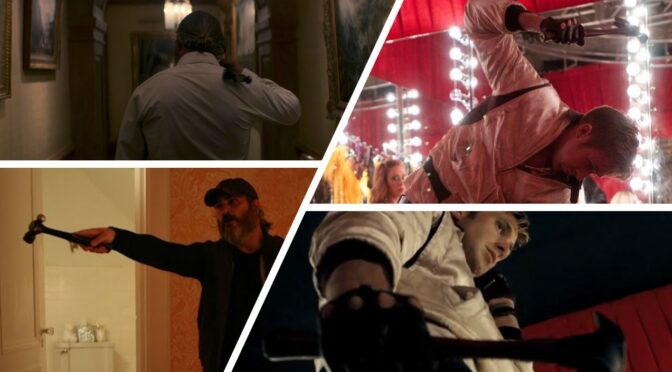 Reading reviews of Todd Phillips’s JOKER, where the high-profile film was described as ‘dangerous’ and ‘irresponsible’, you’ll know that its approach to violence is one that has been discussed endlessly since the earliest days of cinema. Films that can escape this moral backlash despite their inclusion of violence are therefore all the more intriguing, as they not only highlight the moral compass of viewers and critics, but also the cinematic techniques that directors employ to mask or dilute the impact of violence on screen. DRIVE and YOU WERE NEVER REALLY HERE are rare examples of films which have achieved this feat.

Both films contain several moments of graphic violence, but the ways Nicolas Winding Refn and Lynne Ramsay convey this brutality creates a symbolic aesthetic style that is rooted in the studies of their central characters as opposed to glorifying the acts of violence that take place. Driver and Joe are established as violent men early on, and both are forced into brutal reactions when their illegal activities go wrong, yet their motivations and internal struggles are intricately studied and humanised.

“Driver and Joe are established as violent men early on, and both are forced into brutal reactions when their illegal activities go wrong, yet their motivations and internal struggles are intricately studied and humanised.”

Ramsay skilfully wrongfoots our expectations about Joe’s approach to violence in the film’s opening scenes. Joe calmly knocks out an attacker on the street with a single headbutt and smiles at the ball-peen hammer he is about to buy in order to attack men in his pursuit of a missing girl. Yet Ramsay interweaves a visual code throughout the film that gradually informs us about the psychological traumas that motivate Joe’s actions and behaviour. We are repeatedly shown disturbing images of self-inflicted violence as Joe asphyxiates himself with a plastic bag, slowly revealing the source of his suffering. The hammer is revealed to be the same weapon that Joe’s father used to beat him as a child. The ball-peen hammer represents a symbol of hereditary pain and aggression, thereby turning Joe’s acts of violence into pathetic outcries of regret.

“The ball-peen hammer represents a symbol of hereditary pain and aggression, thereby turning Joe’s acts of violence into pathetic outcries of regret.”

Hammers also make an appearance in Refn’s DRIVE after Driver’s planned heist to save his neighbour, Standard (Oscar Isaac), is sabotaged. Once he has tracked down the heist’s fixer, Cook (James Biberi), Driver, recalling the behaviour of Joe, methodically attacks Cook with the weapon, breaking Cook’s hands and holding the hammer to his face. Refn does not focus excessively on these violent actions but subsequently holds the camera in a low angle shot on Driver’s looming, powerful figure as he clutches the weapon in his hand, looking down at Cook as he continues to clutch the weapon. The threat of violence remains prevalent, while the act is shown clinically, much like the precise nature of Driver himself. Weapons of violence characterise the mindsets of both Driver and Joe, creating an aesthetic style that humanises their frequently brutal actions.

Refn and Ramsay also build thoughtful depictions of violence through their use of music. Both Joe and Driver are monosyllabic, and neither film’s running time exceeds 100 minutes. Driver utters 891 words, and Joe, according to Ramsey’s screenplay, delivers less than half this amount. This minimalist style forces the viewer to focus on actions and sounds. Refn’s repeated use of certain tracks often form narrative warnings for oncoming violence. When Driver sees an assailant in the elevator, the scene moves into slow motion as Cliff Martinez’s ambient ‘Wrong Floor’ plays, and Driver kisses Irene. The song then stops and the scene returns to regular speed as he quickly turns around and brutally kicks the assailant to death on the floor. Driver’s actions are incredibly violent, yet the music beforehand calms the viewer, making the subsequent brutality more palatable, albeit still shocking.

“The threat of violence remains prevalent, while the act is shown clinically, much like the precise nature of Driver himself. Weapons of violence characterise the mindsets of both Driver and Joe, creating an aesthetic style that humanises their frequently brutal actions.”

Refn also keeps the camera away from the goriest images of this scene, instead utilising sound to stimulate the imagination of violence rather than actually showing it. ‘Wrong Floor’ is used again in the film’s final scene, preparing the audience for oncoming violence with the song’s peaceful sounds. The film’s most iconic song, ‘A Real Hero’ plays for a second and final time as Driver moves into the distance, reinforcing his heroic saving of Irene while the camera tracks back to the man whom he has just stabbed through the neck. Refn’s soothing musical repetitions emphasise the noble actions of Driver while diluting the impact of violence into stylish symbolism.

A similar musical code is followed by Ramsay in depictions of violence through her repeated use of Jonny Greenwood’s ethereal ‘Tree Synthesisers’. The song initially plays quietly as the camera focuses on a graphic wound on Joe’s back. What might have been a disturbing image with no music makes us sympathetic to Joe’s troubled past, and no words need to be spoken to describe this. The song articulates Joe’s mental state even more poignantly after finding the bloody corpse of his mother, leading to a burial scene in a lake that exhibits outstanding cinematography. The audio of Tree Synthesisers bursts into full force as Joe and his mother’s body sink in the water, and we witness a captivating close-up of his mother’s swirling, bright white lock of hair. The upsetting image of her dead body seen before is now transformed into a beautiful memorial of ambient music and visual art. The song makes its final appearance at the film’s ending, with the camera focusing on the empty seats where Joe and the rescued girl sat. Like Driver, Joe is depicted as an almost mythological being, disappearing from view after fulfilling his purpose of saving the girl. Violence for Joe is a necessary, if unwanted, key to healing his internal strife, and Ramsay’s final use of this musical track signifies a hopeful opportunity to escape from violence.

“Thoughtful violence is created in both DRIVE and YOU WERE NEVER REALLY HERE through each director’s meticulous attention to detail through music, visual symbolism and tight editing.”

Thoughtful violence is created in both DRIVE and YOU WERE NEVER REALLY HERE through each director’s meticulous attention to detail through music, visual symbolism and tight editing. Ramsay frequently depicts her protagonist performing acts of violence, yet rarely ever shows these acts on camera, symbolising Joe’s distaste for his actions. While the violence shown in Refn’s film is often graphic, his aesthetic focus creates a more expressive picture of the main hero. Each director creates more sympathetic ideas of brutality through their minimalist approaches, forcing the viewer to consider more complex ideas of violence through what is not spoken.