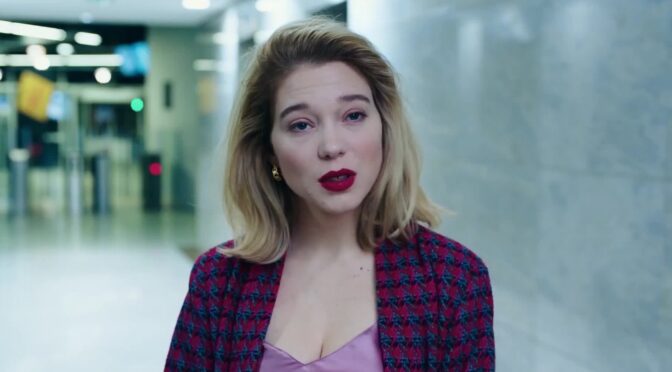 Journalist France de Meurs is being pulled in every direction. When she’s not in the studio hosting impassioned debates, she’s reporting from a war-torn country; when she isn’t dealing with her unhappy home life, she’s facing emotional manipulation at an exclusive spa retreat.

Lea Seydoux’s France is full of these conflicts. She’s so photogenic her image is plastered all over town, but she’s always one misstep away from an overwhelming cry. This state is only exacerbated when she accidentally knocks a young man off his motorbike during the school run, leading to feelings of extreme guilt, taking responsibility by showering him and his family with attention and overly generous donations.

“Much of Bruno Dumont’s film involves France coming to terms with herself as a person, after finding comfort and familiarity in the drama of the constant news cycle.”

During one report from the battlefield, she says: “Wherever we go, images of war are the same. Those of tragedy and desolation.” While not a depressing film, FRANCE’s through-line finds friction, distrust, and error throughout its main character’s life. Having put herself out there as a lead anchor, she finds it impossible to retreat into anonymity. Adoring viewers are as thirsty for selfies as tabloid gossip, more invested in France the brand than France the person, regardless of whether she is in the public’s favour that day or not. Much of Bruno Dumont’s film involves France coming to terms with herself as a person, after finding comfort and familiarity in the drama of the constant news cycle. While staging a report of migrants crossing the Mediterranean, the polished finished product looks nothing like the reality, in which a moment of real-world comprehension causes her to flub her lines and sob – and her own separate, safe transport is conveniently out of shot.

At over two hours, Dumont pads FRANCE with unnecessary bloat. A family tragedy comes from nowhere and leaves little impact, as if ticking off a trope of European cinema that requires grief to arrive thick and often. Not all of the film’s ideas stick. However, all are in service of the notion that France lives an unsustainable life, void of downtime or connections built outside of professional endeavours. She’s distant from her husband and doesn’t know how to connect with her child. Yet, when she is tempted to lower her guard, there is always a reason or two to raise the drawbridge again.

“By peering behind the curtain, the film shows someone who is good at their job but insincere in their role, and highlights the personal impact of that conflict.”

Wealthy and operating at the top of her industry, France invokes any real-world journalist of similar stature and all the frustrations that come with them. By peering behind the curtain, the film shows someone who is good at their job but insincere with in their role, and highlights the personal impact of that conflict. She is advised to stay off social media when she becomes the news herself. Dumont never offers up a solution to this conflict between the professional and the personal. Still, in a therapy session, France logically surveys her situation while acknowledging: “Yes, but my heart is sick, doctor.” Much of FRANCE is about this innate feeling: it recognises the paradox of its main character’s struggle while not being able to square the circle. It instead finds a flaw at the heart of the system, where necessary public service is almost impossible to deliver without sacrificing morality, at the expense of the consumer and the provider.

Like the war, this leads to tragedy and desolation. The industry creates vampires and is itself vampiric, and FRANCE is looking for what it takes to puncture this exhausting never-ending cycle. While not all of it works, it is sharp and full of insightful observations about balancing the public and the private, something with which more and more people are contending. It’s held together by Seydoux’s graceful and subtle performance, slipping between France’s confidence and doubt, often within the same scene, letting these conflicts linger.