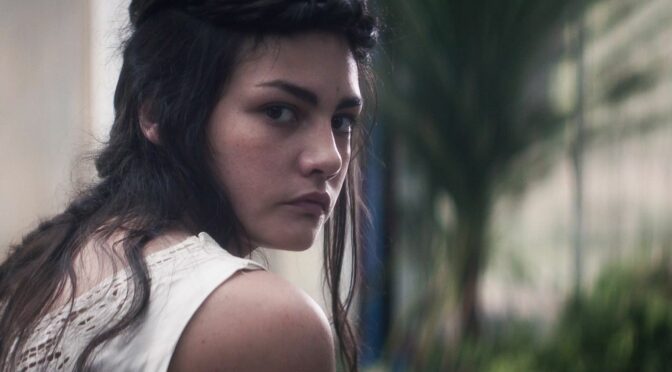 Stories about pandemics and plagues may still feel a little close to home, but the virus in GLASSHOUSE at least has the common decency to make you forget that it’s happening. This sinister epidemic makes an intriguing backdrop for a tense, claustrophobic drama, albeit one that undermines its central mystery.

Following an isolated family unit that a seductive stranger infiltrates, GLASSHOUSE is very much THE BEGUILED by way of A QUIET PLACE, with a dash of MEMENTO thrown in for good measure. While that may sound a little derivative, there’s enough unique identity in this South African sci-fi to keep it from feeling like a retread of any of its influences.

With the film taking place entirely in and around the family’s greenhouse haven, the production design does most of the heavy lifting in establishing the post-apocalyptic aesthetic. Nestled in an overgrown clearing, the dilapidated, filthy greenhouse certainly makes for a striking setting, and the plastic seals over all the entrances give it an otherworldly aura, in the vein of THE MARTIAN.

After a grisly intro that sees Mother (Adrienne Pearce) and her brood picking clean a dead body and harvesting his liver for plant fertiliser, their routine is abruptly upended with the arrival of a nameless, wounded man (Jarryd-Lee Kock). One of the daughters, Bee (Jessica Alexander), brings the stranger back to the greenhouse for medical aid, where she comes to believe that he might be their long lost brother, Luca.

Things don’t escalate quite as dramatically as in THE BEGUILED, with the focus firmly on the debate over Luca’s identity tearing the family apart. Bee becomes more certain as Luca seduces her, but her sister Evie (Anja Taljaard) and Mother remain unconvinced, while Gabe (Brent Vermuelen) – the only remaining son of the family, rendered mute by overexposure to the memory eradicating virus – is instantly distrustful. This conflict is satisfying enough to provide the main bulk of the film, with the performances keeping the tension ramped up.

Without going into whether or not Luca really is who he says he is, the biggest pitfall of this film is not drawing the mystery out long enough to wring some real drama from it. It doesn’t feel all that mysterious through contextual clues and performances, and what should have been the most shocking moment of the film plays out quite underwhelmingly. A bit more uncertainty here would have gone a long way here in maintaining an enigma.

That’s not to say that GLASSHOUSE doesn’t deliver some compelling twists across its runtime, with one third-act reveal, in particular, completely reframing the rest of the plot. This game-changer closes the film on a satisfying, thematically relevant note and adds a fascinating perspective on the question of Luca’s identity. Thoughtful, intelligent turns like these are exactly what makes low-budget sci-fi effective, and they are what makes GLASSHOUSE an intriguing, engaging watch.