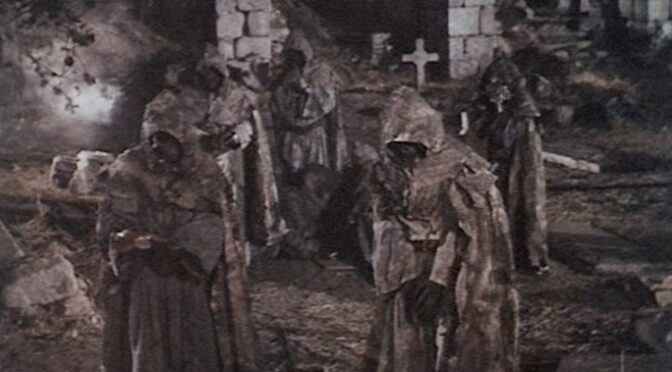 Fantasia International Film Festival transported audiences back in time to the early seventies with Amando de Ossorio’s TOMBS OF THE BLIND DEAD – a stylistic nightmare-scape with enough grindhouse elements to balance out the zaniness of Ossorio’s script. An enjoyable and interesting horror movie, it may have more influence on the trends to follow in horror cinema than its chucklesome B-movie qualities would suggest.

A young woman called Virginia bumps into an old friend from the past, her old college roommate, Betty. Virginia is currently on holiday with her best friend Roger, and it is clear that Roger is instantly attracted to Betty, asking her to come with them on their planned train tour. Betty reluctantly accepts the offer after pressure from Roger. Virginia’s clear jealousy stems from a romantic relationship she had with Betty years before, whom she is evidently still harbouring feelings for, leading her to jump off the train into the ruins of Berzano – a place avoided and feared by locals. When Virginia winds up gruesomely deceased, Betty and Roger’s curiosity about Virginia’s stay in Berzano may lead them to the same fate.

Ossorio’s creation is stylistically impressive, and the attention to detail in the design process aids the rural and eerie earthy tones that give TOMBS OF THE BLIND DEAD a very pronounced and haunting atmosphere. There is a fair bit of inspiration laced through Ossorio’s film, from the elements of the plot that are reminiscent of Romero’s NIGHT OF THE LIVING DEAD to a nod to the film through the ruins, rurality, and with the climax following in Romero’s footsteps – albeit not quite as gory.

The plot is quite difficult to digest, but more in a more interesting way than anything else. It almost seems to have taken elements of Giallo-style thrillers; there is a real sense of an eccentric murder-mystery formula that follows Roger and Betty’s sleuth storyline. Hardly traditional, however, since the audience is well aware of the templars almost from the off-set. It’s a deeply interesting film to watch retrospectively, especially when you consider it closely follows Argento’s renowned Giallo thriller THE BIRD WITH THE CRYSTAL PLUMAGE, a much more traditional example of the genre, but more so when you consider Argento’s reformation of the Giallo genre into one that also trespasses into supernatural horror. Whether Ossorio was an influence behind the changes in Giallo cinema will be subject to debate, but he, nevertheless, crafted an introduction into the unconventional in European horror. A film that seemed to function through a lot of homage and managed to create something new and influential.

It’s so rare to see a film where, by the time the credits roll, you can already see its reflection in cult horrors throughout the years: more subtly in the rural and exploitation aspects of THE EVIL DEAD, but much more starkly in Fulci’s ZOMBIE FLESH EATERS. The common feature is a representation of the undead as some sort of dishevelled mummies. Much like Ossorio, Fulci imbues meaning into the juxtaposition of the comfort and the desolation of the great outdoors, showing it as a symbolic border between man-made heaven and the depths and perils of local and agrestic locations.

Despite its stamp on European horror, the film is far from perfect, but at the same time, it’s clear that perfection was never its intention. The grindhouse and exploitation elements are a little bit confusing when you consider the lack of nudity and the lack of a sexualised nature to any sex itself. Ossorio has a flashback scene of Virginia and Betty’s past relationship, which is very PG-13, to say the least. This reticence isn’t odd in itself, but when we run into a woman being sacrificed with her breasts being slashed by a Templar with a sword (and an uncomfortable and out-of-nowhere rape scene as the plot develops), it does make you question the purpose behind the earlier scene’s extreme modesty.

Some snippets are a little ‘Scooby-Doo’ in nature, such as the undead horses of the templars appearing from nowhere, chasing Virginia to her slaughter. It’s unclear if they were ever raised from the graves of Berzano or are meant to be more of a spiritual manifestation – but, regardless, they add fun and lighthearted rhythm to the more disturbing tempos of the story.

The real merit of TOMBS OF THE BLIND DEAD is the political discussions at the core and how Ossorio manages to infuse them into the mayhem of the script subtly. There are undercurrents of misogyny, such as when Victoria is found dead (with comments about her “asking-for-it outfit”), or the woman sacrificed for eternal life by the Templars. For the lighthearted B-movie exterior of Ossorio’s film, it is a very intelligently written movie that has the last laugh at poking fun at the political semiotics that the horror genre is built around.

TOMBS OF THE BLIND DEAD is a fun, ominous, bizarre, intelligent and engaging cult flick, and an engaging one to see how those adjectives can marry together into one film. Ossorio’s film is a hidden gem and a portal into the building blocks of modern European cinema and the auteurs who helped to heighten its narrative versatility and revolutionary possibilities in film.