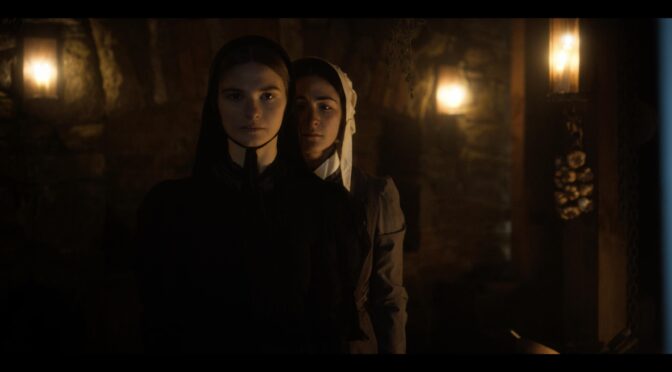 THE LAST THING MARY SAW is an atmospheric period film many may feel they have seen before – more recently for others, perhaps, if they have tuned into the FEAR STREET trilogy on Netflix. Themes, plot points, and characters may seem a little derivative to horror trends in A24 culture and more distant modern horror tales. However, if we are willing to look beneath the surface, there is a great deal of novelty in Edoardo Vitaletti’s feature that premiered at Fantasia International Film Festival.

The story opens with Mary (Stefanie Scott) appearing before a judge to explain a crime for which she appears to be on trial. What is yet to be revealed is the court’s hesitancy towards her, and what dark elements have been applied to her character. As she reveals the details of her past, we are transported to her life in the country god-fearing roots in her family home. Her family is on the edge of shunning her entirely for her intimate relationship with a live-in maid, Eleanor (Isabelle Fuhrman), and both girls are subjected to cruel abuse in an effort to cleanse them through the family’s own warped religious methodologies – set to escalate in a depraved fashion when the young women refuse to end their relationship.

In technical terms, the film effectively produces a sinister, foreboding tone that elevates the Jekyll and Hyde nature of the characters. With the plot taking place in the past, it becomes difficult to discern the linearity and causation of the film’s twists and turns. In many ways, this works well and amplifies the reality that the story is constructed entirely from Mary’s recollection of the events that led to the prologue. THE LAST THING MARY SAW challenges many predictable formulas inperiod horrors, the threats evolving like a spider’s web of instances coalescing around the unsettling conclusion. We are often left fumbling around in the dark – both literally and figuratively, with the candlelight only revealing fragments of the family’s darkness.

What is also surprising about Vitaletti’s feature is the lack of the supernatural. While there are fantastical elements that stay true to the gothic structure of the film, there is a focus on the characters as the predominant forces within Vitaletti’s re-telling of the fusion of period drama and the horror genre. This blend is a refreshing way to approach this type of filmmaking when it is easy to push demons and spectres to the forefront of gothic horror tales. Instead, Vitaletti spends more time exploring the realism of people from the past separated by forced conservatism and religious ideology – an idea that reinforces the true horror of nonconformity. In Vitaletti’s cinema, there are things far scarier than bumps in the night, and the fly on the wall feeling for the audience comes with other prompts of intensity and dread.

However, the underdevelopment of the characters, particularly the antagonists, comes close to slightly isolating the audience from the story. While some of the characters are rich in complexity, many within the family are difficult to understand, and the antagonists merely exist in their actions and brief moments of dialogue, which never seem enough to appreciate their menace.

THE LAST THING MARY SAW is an eerie feature, with a brooding ambience and a fresh approach to the period horror genre. While there are areas of the writing that do not have as much to offer as many horror enthusiasts will expect, there are more elements that work exceptionally well than ones that do not. Vitaletti’s film may seem like something you have seen before, but if given half a chance it will prove itself to be an innovative and stimulating work of art.