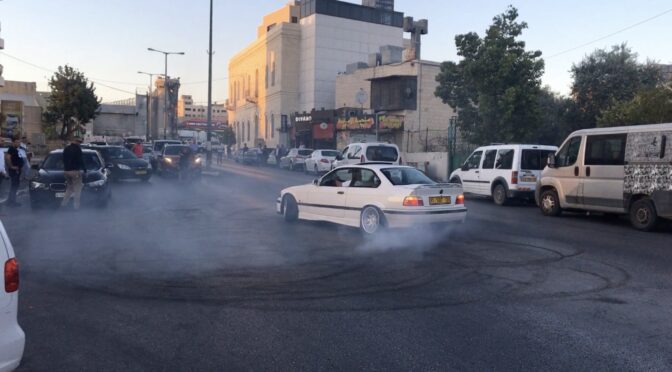 Palestinian artist Emily Jacir writes to her friend concerning her family home, Dar Jacir, as well as the road on which it sits, and the city through which that road travels. LETTER TO A FRIEND is a video essay, a diary and a document, narrated by Jacir’s letter correspondence. It tells us we are here to bear witness to her house and neighbourhood, her home, “before a crime is inevitably committed.”

Built in the 1880s on a main road in Bethlehem, Dar Jacir has seen the Hebron-Jerusalem road transformed. For centuries it was a thoroughfare that continues northwards to nearby Jerusalem and south to Hebron. Rachel’s Tomb sits further down the street, while the Church of the Nativity can be found by taking a fork in the road, such is the biblical heritage of the neighbourhood. We see photographs of Dar Jacir’s construction in the Ottoman period, and its journey through the 20th Century. Presently, sitting in what is now known as the West Bank, Bethlehem is an island of Palestine surrounded by illegal Israeli settlements.

Dar Jacir seems to be no longer situated on its historic pathway, but at a flashpoint for demonstrations and repression, now dotted with checkpoints and carved up by the huge grey wall that zigzags around and through the neighbourhood. Rachel’s Tomb is holy to Muslims, Christians and Jews, and was once an open feature of the street, but now sits behind huge prison-like concrete barriers and Muslims are deterred. Bethlehem is and was many things, but it can now also count on holding the dubious honour of being the most tear-gassed place on earth.

Early on, Jacir notes that she wanted to document the entirety of her home as a young girl, feeling a deep-seated need to commit it all to memory. Indeed, we see Jacir’s various videos of Dar Jacir and the street in the recent past, noting the incremental changes. In LETTER TO A FRIEND, this spirit of wanting to capture the entirety of something, to trap the house in amber for preservation must be strong when the developments all around it are so precipitous and destructive. The one-way direction of travel is occupation.

Handheld, eye-level footage captured by Jacir is edited together between friends’ photographs, news footage, maps and documents, screenshots, and camera phone clips. Though deeply personal and occasionally gut-wrenching in its content, Jacir narrates the tour with a wry and deadpan tone, suggesting both a painful numbness and a self-preserved humour.

The impression given is that what once had a sense of perpetuity has undergone a rapid, recent, and enduring change. An accelerating transformation that has not only scarred the neighbourhood physically with walls and checkpoints and detours, but has warped the nature of the very fabric of life in Bethlehem, the experience of understanding the place as a resident has shifted into disorientation. Jacir’s house sits on a main road that has existed for centuries, and now – for the first time – that road is brutally disrupted, to the extent that it really cannot be the same road as before.

Jacir wants to make this experience knowable to others, while acknowledging that showing a map of a wall does not convey what it is like to live with it on your doorstep. We are invited with surprising candour to see a ground-level tour, walk a dog by the wall, see the best supermarket in Bethlehem, and bump into Croatian tourists and a very loud wedding party. The reoccurring motif is Jacir counting her steps on the street; the journeys to her friends’ homes are getting longer and longer. The mundane can seem boggling, the warping of the city has also been accompanied by regular clouds of tear gas and demonstrations, the sound of bullets, snipers and soldiers, barricades made from bins. Is the crime inevitable? Has it already happened?

LETTER TO A FRIEND is screening at Document Human Rights Film Festival online from January 25th-30th. There is a free live Q&A where director Emily Jacir will be in conversation with artist and activist, Sarona Abuaker Saturday, 30th January, at 6.30pm, on Zoom. To find out more and register, visit the Document website.