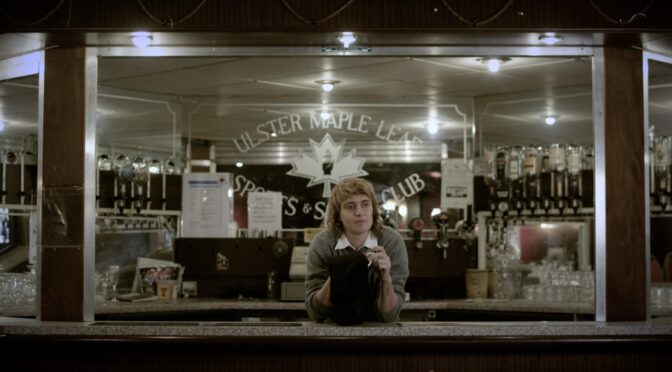 Director Mariah Garnett places herself at the heart of the Northern Ireland troubles, with the help of the accounts from her father, Dave. Estranged until Mariah was in her late twenties, her father (who moved from Belfast in the late 1960s) now resides in Vienna with his partner. Garnett heads to Vienna to begin filming a documentary with Dave as the subject, hoping to focus on his time in Belfast in the 1960s, at the beginning of the Civil Rights Movement and following his decision, as a Protestant, to marry a Catholic.

Dave, now an artist, is almost as much of a mystery to Garnett as he is to us. We’re seeing him through her eyes, estranged and almost alien. Dave’s struggles of reliving and remembering the past are clearly documented. Unwilling to return to Belfast, Dave remains in Vienna whilst Garnett digs deeper into her father’s past, walking the streets of his old neighbourhood hoping to learn and connect.

Garnett brilliantly lends herself to her father, reconstructing scenes and lip-syncing interviews herself as if he were present. She allows Dave to be documented despite his absence: a unique and moving way of reconnection, seeing daughter transform into father.

What TROUBLE has done so well is allowed anybody without a wealth of knowledge of that particular time in history, an opportunity to accompany Garnett on her journey into the heart of Belfast as she learns about the Civil Rights marches, the People’s Democracy and the evolution of the IRA, with the likes of Michael Farrell and John Gray adding context and narrative where there lay missing pieces. It’s clear from the encounters she has with people on the street that the divide is still prevalent throughout Belfast – “Where is he from?” (referring to Dave) is a common question and a way to deduce any religious and political propensities.

What we get is an in-depth account of Dave: a teenager in Belfast in the late sixties who struggles to find an identity, who marches and protests but still can’t escape the divide he walks every day. But the take-home from TROUBLE is undoubtedly a daughter’s attempt to reconnect with her estranged father, slipping into his skin and becoming him in the hope to understand his past actions. Watching Garnett channel her father in interviews and on the street is both brilliant and heartbreaking. She has not only successfully produced an unbiased account of a piece of Northern Ireland’s history, but has done so with the tact and curiosity that can only come from someone truly trying to understand and grasp the life and decisions of another.

TROUBLE is showing at Document Film Festival until Sunday 31st January. To watch the film visit the Document website, or watch the Q&A with director Mariah garnett below.