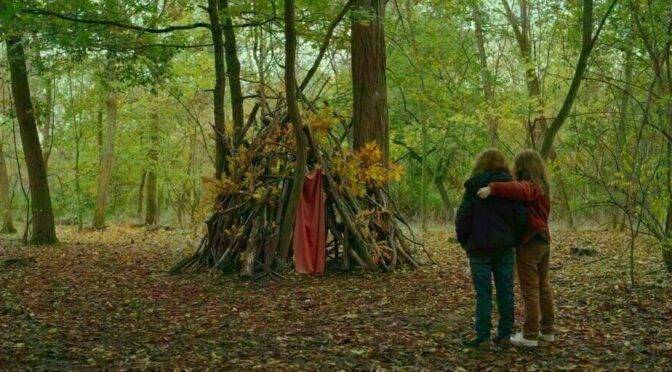 PETITE MAMAN, the latest film by Céline Sciamma, is a magical realist departure from the more grounded films previously directed by her and weaves a delicately beautiful story about childhood, parenthood, and the relationship between them. With captivating central performances from two talented young actors and a crisp autumnal palate, it develops a deep emotional resonance that stays with you much longer than its 72-minute runtime.

After Nelly’s (Joséphine Sanz) grandmother dies, her mother (Nina Meurisse) and father (Stéphane Varupenne) take her to stay at her grandmother’s old house while they clear it out. Nelly explores the house and her mother’s old childhood things before venturing out into the surrounding woods. She meets a little girl (Gabrielle Sanz) the same age as her and strikes up an immediate friendship.

The story is told entirely through the perspective of a child and shows the attention to childhood that Sciamma demonstrated previously with TOMBOY, WATER LILIES, and the co-written MY LIFE AS A COURGETTE. We see the world – the grandmother’s house and the expansive woods beyond – as slightly too big for Nelly: she’s surrounded by emotions and events that she’s working hard to understand.

“Joséphine and Gabrielle’s incredible performances allow us to feel for the girls while exploring our own memories and feelings of childhood.”

Given this perspective, it’s obvious that the two girls, Nelly and Marion, are at the centre of the film, and the actors, Joséphine and Gabrielle Sanz, give incredible and understated performances. The two play dry and stoic kids through whose eyes we see the world. At a Q&A at a BFI London Film Festival screening, Sciamma said that she wanted to focus not on the emotions of the girls but on the emotions of the audience: of what the girls’ experiences make us feel. Joséphine and Gabrielle’s incredible performances allow us to feel for the girls while exploring our own memories and feelings of childhood.

Filmed in Sciamma’s childhood hometown, Cergy-Pontoise, cinematographer Claire Mathon captures the crisp colours of all the leaves in the woods, the mysterious angles and dated furnishings of the grandmother’s house, and the soft beauty of the town’s lake. From the first scenes of an early autumnal sunset drenching the retirement home in orange light to the hazy sunlight reflecting the reds, browns, and oranges of fallen leaves, the film captures an eternal autumn of childhood where days stretch on forever. It’s a sumptuous palate that places the film in an endless and timeless childhood rather than any specific decade.

“Though the story seems very personal in its exploration of mother-daughter relationships, the emotional resonance ensures an impact beyond that. Sciamma captures the experience of striving to understand your parents as a child.”

PETITE MAMAN is clearly a labour of love for Sciamma, who directed, wrote the script, chose the shooting location, designed the costumes, and contributed to the music. It’s a stunning and beautiful film and a worthy follow-up to the very different PORTRAIT OF A LADY ON FIRE. Though the story seems very personal in its exploration of mother-daughter relationships, the emotional resonance ensures an impact beyond that. Sciamma captures the experience of striving to understand your parents as a child. As a kid, it’s hard to comprehend that our parents lived lives before we were born and had their own childhoods that seem inconceivably distant to us. PETITE MAMAN flattens that parental hierarchy in a delicate way that never talks down to children or treats them as emotionally lesser to adults.