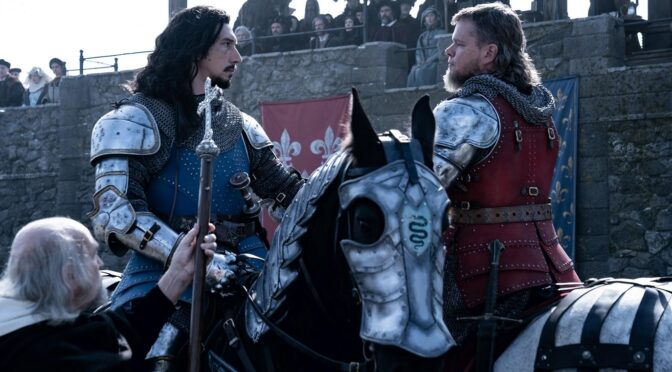 Dodgy haircuts and questionable accents aren’t enough to dilute the compelling plot of Ridley Scott’s historical epic, THE LAST DUEL, where one woman’s accusation of rape is detailed in a RASHOMON-style structure of passion and deceit. Committed performances from Jodie Comer and Adam Driver strengthen a contemporary #MeToo story of adversity in the face of patriarchal forces.

We start at the beginning of the end as two men prepare to fight to the death and prove their honour in the sight of God. Each combatant is armoured and prepared for battle, but Scott swiftly whisks us away before we witness the action take place. Based on Eric Jager‘s historical novel of the same name, the film documents a charge of rape made in medieval France by Marguerite de Carrouges (Jodie Comer). Her husband Jean (Matt Damon) challenges his accused squire Jacques Le Gris (Adam Driver) to a fight to the death in what is thought to be the last legal duel in the country’s history. If Jean succeeds in the conflict, he is considered the truthful claimant and, therefore, righteous under the laws of justice. However, if he is killed, his words are considered baseless, and Marguerite’s accusation is rendered false, therefore warranting her execution by burning at the stake. Under 14th century French law, women were considered the property of their husbands, and an accusation of her violation was deemed to be little more than an abuse of her partner’s property.

Instead of following a straightforward linear narrative, Scott approaches the events leading up to the rape and the violation itself from the perspective of the three central characters. Brutish, proud, and honourable, Jean de Carrouges is a skilled warrior and dutiful husband to his wife in the opening interpretation. Responsible for saving the life of his comrade Le Gris during warfare, he is unjustly betrayed when land promised to him in his dowry to Marguerite is handed over to Le Gris by Count Pierre (Ben Affleck). While Affleck’s Dionysian performance provides enough ham to satisfy his whole court, Damon’s stiff jaw and indignant glares provide a sufficiently moody counterpoint.

“Much can be made about the characters’ eccentric hairstyles and their historical accuracy. Carrouges’ mullet seems more at home in a 1980s tribute band than the brutal landscape of the Hundred Years War.”

Much can be made about the characters’ eccentric hairstyles and their historical accuracy. Carrouges’ mullet seems more at home in a 1980s tribute band than the brutal landscape of the Hundred Years War. Damon justified his character’s mighty barnet with the practicalities of warfare, noting how Scott wanted Damon to take a knife “and cuts the sides of my hair just so I could get my helmet on”. A similar point could be made for the long locks of Driver’s squire, who rarely engaged in conflict and generally relied on his intellect and wit to win the favour of Pierre. Weak attempts are made to mirror convincing French accents, with Comer’s organic English voice providing the strongest air of realism.

When we reach Le Gris’ side of the story, the noble Carrouges is regarded as a pompous and ungrateful knight. On the other hand, Le Gris naturally views himself as the wounded party who attempts in vain to defend the ignorance of his friend and is innocently led on by the glances and words of Marguerite. It is only when we reach the third and final viewpoint of Margeurite herself that the flaws of both men are exposed. What Le Gris interprets as a furtive gaze during a banquet is shown to be little more than a polite glance. The honourable behaviour of Carrouges towards his wife is cold and possessive, at one point pushing Marguerite up against a wall and making her swear her account to be truthful after earnestly disclosing her traumatising experience.

“The climactic battle eclipses the brief cuts of violence we witness in Carrouges’ opening account, where men are mercilessly slaughtered on the battlefield in bloody, swift cuts and ear-splitting crashes of steel”

The climactic battle eclipses the brief cuts of violence we witness in Carrouges’ opening account, where men are mercilessly slaughtered on the battlefield in bloody, swift cuts and ear-splitting crashes of steel. The grisly deaths of competitors witnessed only briefly in Scott’s own GLADIATOR pale compared to a single sustained shot in the film’s brutal denouement. Scott crafts a masterful epic of the frailties of man. Come for the Dionysian haircuts and audacious mullets; stay for the engrossing narrative.