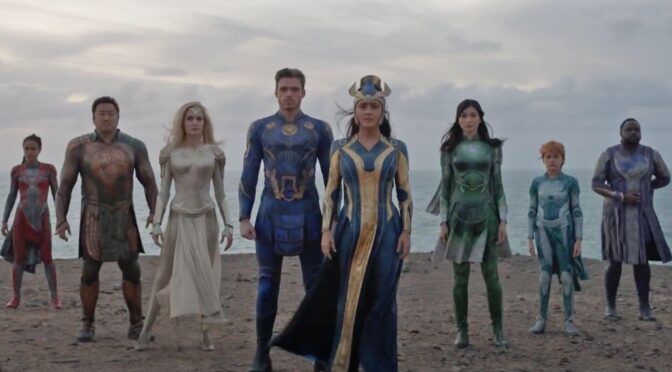 ETERNALS marks an odd coming together of the Marvel Cinematic Universe behemoth – $23 billion in box office across all the films and counting – with recent Oscar winner Chloe Zhao, whose NOMADLAND (whilst wonderful and handsomely profitable for its budget) didn’t quite crack $40 million. The resulting film is an odd blend, featuring segments of unusual natural beauty and humanity for a comic book blockbuster. Still, this tonal change is stymied by the need to stick mostly by the formula of its franchise brethren, and the film feels very inhibited as a result of its lack of boldness.

The ensemble cast plays the Eternals, a group of seemingly immortal humanoids sent to Earth 7000 years ago by the Celestials (planet-sized god-like beings). Their job was to protect humanity from Deviants, presented here primarily as destructive creatures with an initial design similar to a more colourful version of the Mimics from EDGE OF TOMORROW. Although the group eradicated Deviants from Earth centuries ago, a re-emergence prompts the group to come together once again and reunite from their now-disparate global locations.

The film jumps back and forth between the present-day crisis and various eras in human history where the Eternals were attendant. Throughout the historical segments, there is ample opportunity for Zhao to place her characters in scenes of natural beauty. However, these sit at odds with the slightly more generic feel in exposition scenes or CGI/green-screen heavy segments. ETERNALS frequently manages to show images of tangible, sunlit vistas when the Marvel films have usually featured impressive but synthetic concoctions; the sort of thing which feels more at home as a Twitch streamer’s desktop background. Ikaris and Sersi, for example, will be presented in a golden hour Mesopotamian desert mere moments after a colour-saturated CGI monstrosity intended to be Babylon.

“ETERNALS frequently manages to show images of tangible, sunlit vistas when the Marvel films have usually featured impressive but synthetic concoctions; the sort of thing which feels more at home as a Twitch streamer’s desktop background”

It’s notable that Zhao is not working with her regular cinematographer and instead with Ben Davis, who has shot previous Marvel entries CAPTAIN MARVEL, DOCTOR STRANGE and AVENGERS: AGE OF ULTRON. Visually, the film feels a little caught between two stools: it is notably different from previous entries in this series, which have had neither the inclination nor opportunity to harmonise the characters’ humanity with the environments they inhabit (or, indeed, the opposite). However, the film can’t entirely take the leap and stray more meaningfully from the standard template. The editing also maintains a familiar rhythm (Zhao having edited two of her previous three features herself), with few scenes or exchanges left to linger for more than is necessary to progress the plot.

This reluctance is unfortunate given the potential of the storyline. There is a hint of PROMETHEUS in the premise: an alien race providing guidance and a spark of inspiration to humans, with an undercurrent of what humanity, if any, there is in how these near-deities regard their charges. Many of the Eternals are designed to piggyback on legendary figures of Greek mythology: the homonym Ikaris (Richard Madden) is the clearest example, but it also runs to Brian Tyree Henry’s engineer Phastos (Hephaestus), Angelina Jolie’s Thena (Athena) and others. However, any potential to examine humanity from this immortal viewpoint is dealt with in very short bursts (including one Hiroshima-based diversion that plays very oddly) in favour of the Comic Book Ticking Clock Crisis™ plot. Although that is to be expected, it is unfortunate given its crumbs in the script and visuals.

“The performances also reflect this split identity of the film, with emotionally earnest scenes and humorous interludes oddly juxtaposed with the Marvel signature action sequences in a way that doesn’t quite blend.”

The performances also reflect this split identity of the film, with emotionally earnest scenes and humorous interludes oddly juxtaposed with the Marvel signature action sequences in a way that doesn’t quite blend. Richard Madden probably inhabits this odd duality the most effectively individually as Ikaris, and although there is a decent balance across the ensemble as a whole, it’s hard to escape the jarring clash between, say, Kumail Nanjiani’s essentially comic performance with the more existential concerns described via Angelina Jolie’s. Gemma Chan’s Sersi is a performance that feels more calibrated for the gentler, contemplative aspects of the film, leaving her role – the closest the film has to a ‘lead’ – crowded out by the more bombastic ones around her.

ETERNALS undoubtedly opens up new avenues within the Marvel realm and achieves the goal of expanding the universe of possible stories to be told as the series looks to move into a new era. However, the conflicting approaches that can be felt here reveal that this range of films isn’t ready or willing to expand how it tells those stories.