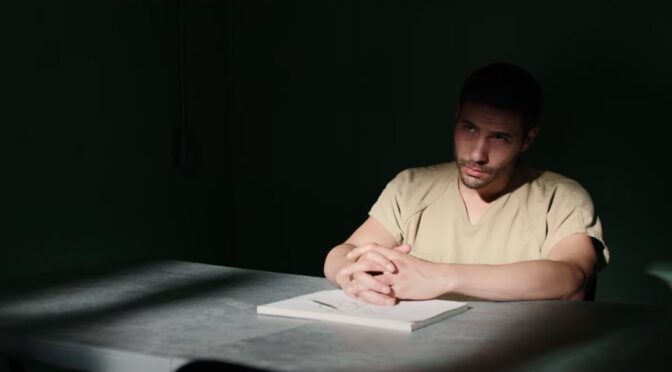 Kevin Macdonald’s THE MAURITANIAN is a feature adaptation of Mohamedou Ould Slahi’s autobiographical novel Guantanamo Diary. Macdonald, using the combination of Tahar Rahim’s stellar performance and a screenplay that harbours stiff accountability, creates the film that finally condemns the immorality at the core of the U.S. detention centre.

Mohamedou Ould Slahi (Tahar Rahim) is imprisoned in Guantanamo Bay without trial for suspected association with Al-Qaeda, in the wake of the 9/11 attack. He is subjected to isolation, torture, and threats to his family to obtain a signed confession from Mohamedou for his involvement with Osama Bin Laden. Attorney Nancy Hollander (Jodie Foster) fights the U.S. legal system and prosecution lawyer Stu Couch (Benedict Cumberpatch) in an attempt to revoke the death penalty and find out for herself whether he is who the U.S. military believes he is.

THE MAURITANIAN goes much deeper into the political discussions of the issues surrounding Guantanamo Bay. Unlike films like VICE and CAMP X-RAY, which have discussed this topic in the last decade, THE MAURITANIAN is less interested in humanising and empathising with the U.S. military and instead uses the screen to digest the scope of the war crimes at play. Where films have danced around the sidelines of the enigmatic debate of the possibility that many held at Guantanamo could, in fact, be guilty, Macdonald seems to question whether or not conviction can ever redeem the methods at work to secure it.

Where THE MAURITANIAN loses a bit of its emotivity are the supporting performances that are underwhelming through a combination of under-writing and miscasting. Jodie Foster never truly embodies the activist at the centre of Nancy Hollander’s character with the little material she has to work around. When she is met with the confessions of Mohamedou’s treatment and the amount of omission she finds with files for Mohamedou’s case, it almost seems that she is confronted with more of a work crisis than a crisis of faith in the U.S. justice system. Benedict Cumberpatch has, like Foster, proved himself to be an actor of prestige and skill. Still, his detachment from the role and a few major accent malfunctions take away his credibility as one of the main antagonists to the story.

THE MAURITANIAN is one of the most revealing movies about the U.S. military’s actions after 9/11. It is a film that is keen to explore the ethical and political questions that other representations have sat on the sidelines without diving into a real discussion. While some areas are slightly rough around the edges, it is more than certainly a film of merit; as an informed, thought-provoking and emotionally charged piece of cinema.