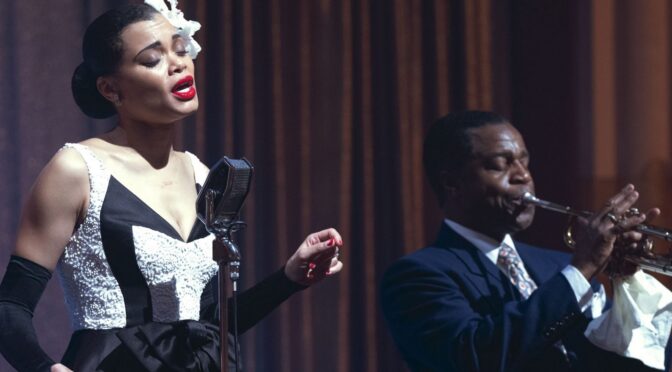 Hounded by the Federal Bureau of Narcotics as punishment for her incendiary song ‘Strange Fruit’, jazz icon Billie Holiday (Andra Day) navigates her career, drug addiction and multiple love affairs. She has a particularly turbulent romance with Jimmy Fletcher (Trevante Rhodes), a black Federal Agent tasked with leading the operation against Holiday. With her story inextricably tied to race and civil rights, this drama has grand ambitions but skirts around too many weighty topics.

Opening on a horrific photograph of a white crowd commemorating a lynching, Daniels sets an uneven tone for what should be a compelling and thought-provoking story. Unfortunately, he falls into the same trap as many other biopics in attempting to cover too many events in the subject’s life, resulting in a diluted story with insubstantial discussion of any point he wishes to make about passion and artistry. Particularly in the first act, characters deliver expository dialogue to detail the contemporary social climate and establish Holiday’s trouble with the law. There are several moments where the audience is simply told of significant developments, such as Holiday’s divorce or past sexual assault. Certain aspects of her life need not be seen, but having significant events cited momentarily without an appropriate emotional response from the characters feels overly casual. There is one brief flashback involving Holiday’s uncaring mother and talk of prostitution. However, it feels ill-placed in the story and is never again addressed, and therefore fails to register properly.

Fletcher’s story is similarly rushed, glossing over the character’s interesting aspects to get to the next stage in Holiday’s career. Conversations that outline his relationship with his mother end before they can take the viewer to a meaningful destination, while infrequent scenes in his Federal office merely toy with the subject of black agents turning on their own community for superficial praise. Being one of the first black Federal Agents, Fletcher feels a sense of pride and responsibility in cleaning up the narcotics situation among African Americans, naively thinking arrests will resolve the problem. Of course, he will come to question his assignment, but this notion of morality and ethics rings hollow when little time is spent showing him at work. In fact, the film can’t quite seem to decide whose story it wants to follow. While described as the love affair between Holiday and the agent on her tail, the pair only share fleeting moments before the halfway point. There are lustful, curious glances as they notice one another but little conversation. When Holiday is twice apprehended for drug use, Fletcher appears to be only one of several agents working to put her behind bars. Additionally, the film does not reveal his employment in the Bureau until after the first act arrest, meaning his early intentions are unclear. Their first meeting would have had a greater impact had the filmmakers already shown where his allegiances lie, thereby creating tension and teasing inner conflict when they interact under false pretences.

The heavy lifting absolutely goes to the performances. Andra Day impresses in a performance that initially feels like an imitation but comes into its own as the narrative progresses. Her commitment to the role is palpable, doing her best to bring Holiday’s presence to the screen when she works against a script that bypasses too many intricate and delicate facets of her life. Rhodes conveys a natural, subtle quality that helps ground a louder, flashier performance from Day. He feels believable when exhibiting Fletcher’s admiration and sympathy for Holiday, but the script doesn’t go deep enough to entirely sell their affair or his shifting loyalty between the singer and his superiors.

Fletcher acts as a vessel for the audience to gain a new understanding of Holiday as a person. It is ironic, then, that Daniels keeps viewers at a distance, just like how the singer refuses to get too close to Fletcher. For much of the runtime, the direction feels detached, failing to pull the viewer in and reveal what is going through the characters’ minds. There is an overreliance on montages and overlays to give life to scenes of Holiday performing onstage and lazily convey the passage of time while trying to connect the leads in lieu of sufficient screen time visually. Editing tricks are a weak substitute for having characters engage physically with one another. Only in the second hour does the camerawork take a noticeable positive effect. What once was flat and stationary becomes fluid and penetrating in two distinct scenes. Holiday’s stumbling upon the aftermath of a lynching gives the film a burst of furious energy. The camera spins in an almost disorienting fashion from a flaming cross and screaming children to Holiday’s heartbroken reaction, swiftly tracking her movements inside a darkened house, constantly moving through each room while capturing her friends’ behaviour. Fletcher knocks a needle out of one man’s hand as Holiday keeps moving, smoothly transitioning into a concert hall where dismay turns to simmering rage. Shot in closeup as she performs her anti-lynching ballad ‘Strange Fruit’, the direction finally rises to action, beckoning the viewer to study the pain and resentment on Holiday’s face as she uses her voice as a rallying call to anyone willing to listen. Finally, Daniels allows us to get close to Holiday – no gimmicks, just raw emotion.

Unfortunately, this attitude arrives late in the film. This powerful sequence is undermined by a superficial narrative that barely scratches beneath the surface. What should be a call to arms is instead a rather frustrating endeavour that sporadically evokes but never amplifies Holiday’s voice.