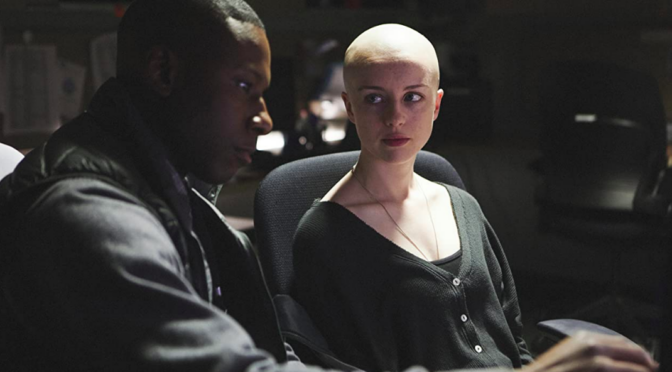 After carefully creaming and shaving her head, Katie Arneson (Kacey Rohl) sets off for her university campus in Ontario, posing for selfies with fans and well-wishers in front of posters announcing a fund-raising drive to help her beat cancer.

Part of the money donated will pay for a trip to Seattle where a radical and expensive new treatment awaits, an alternative to the course of chemotherapy Katie is currently undergoing, leading to her dramatically skeletal appearance. Nevertheless, Katie soldiers on despite the energy that a complicated dance routine (another fund-raiser) is draining from her. No wonder she’s the most popular girl on campus, with a loving girlfriend, Jennifer (Amber Anderson), as well-heeled and normal as Katie is brittle.

There’s a snag. For the paperwork to be completed and a bursary achieved by the end-of-the-week deadline, Katie needs to provide medical records of her condition, which don’t exist: not a surprise because Katie has been faking it all along. The scar on her arm where a melanoma was supposedly removed is, in fact, the remains of a childhood soccer injury. And from here on in WHITE LIE escalates into a race against time. Katie’s passive aggression combines with ruthlessness against whoever stands in her way, starting with the unquestioning Jennifer. It’s to the great credit of writer-directors Yonah Lewis and Calvin Thomas that they can create this monster without forfeiting an appalled sympathy for Katie’s desperation.

Her victims include medical students willing to forge records in return for sorely needed cash (provided by Jennifer). Still, Katie’s scamming comes temporarily to a screeching halt in the shape of her father Doug (Martin Donovan in an excellent, humanity-restoring cameo). From their scene together, we learn that Katie has form faking her health, missing years of schooling after her mother died. Doug’s way of putting an end to the madness is simple: blowing the whistle on Katie via her Facebook fund-raising page. There are predictable consequences, but these are less interesting than the effect it all has on Katie and Jennifer’s relationship and the lengths Katie is now prepared to go to reassert her power over the cancer of her own making. Such is the tension maintained throughout that even the last moment, a split-second shot in a radio station corridor, has a huge, emotional (and satisfying) power.

On top of Kacey Rohl’s mesmerising Katie, the performances are all realistic and well-judged and the technical credits impressive: cameraman Christopher Lew does a fine we-gotta-get-outta-this-place job on Hamilton, Ontario, its bleak industrial landscapes contrasting with antiseptic medical rooms and academic offices, and the warm, welcoming Canadian homes not realising what they’re inviting in. Lev Lewis’s score sets the right unsettling note from Katie’s first appearance on campus as the malevolent cuckoo in this wholesome unsuspecting nest.