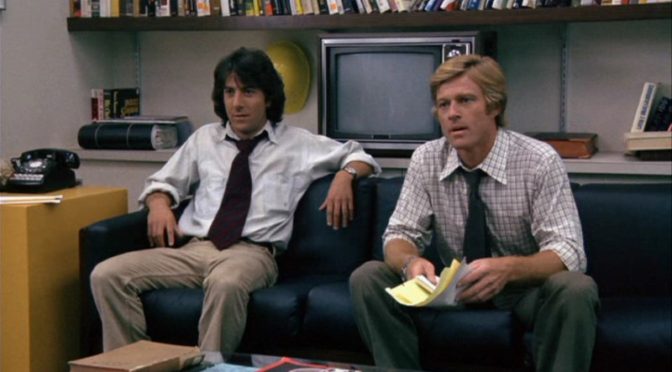 When it comes to cinema and literature, Richard Nixon and the Watergate scandal are the gifts that really do keep on giving. Whether it’s the drama of NIXON or FROST/NIXON, despotic futures in WATCHMEN, parody in TV series Futurama, or even the proclivity for robbers to wear caricatured masks depicting his features, Nixon is always first in line for a political villain.

It is a bit paradoxical, therefore, that the finest entry into cinema of the events leading to his downfall is one where he does not appear outside archive footage. ALL THE PRESIDENT’S MEN depicts the slow unravelling of the cover up of the incident, as sleuthed out by Washington Post reporters Carl Bernstein and Bob Woodward (the pair upon whose book the film is based).

Rather than framing the scandal as a top-down political thriller, director Pakula’s film shows the bottom-up detective story. As the investigative duo, Robert Redford and Dustin Hoffman play excellently and humorously off one another as the film painstakingly details the world of investigative journalism, hanging it on the biggest political scandal of them all.

Despite the dialogue-heavy script, the leads and support (Jason Robards as the pair’s executive editor and Hal Holbrook as informant Deep Throat chief amongst them) inject urgency into it, even when the investigation seems at a dead end. Although many tales have been told, it is the genesis story of the Nixon/Watergate scandal that remains its most compelling.

One thought on “All The President's Men Review”