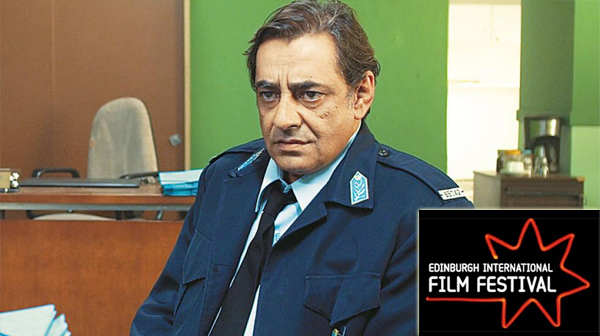 Fillipos Tsitos’ UNFAIR WORLD reflects a world of relationships where trust has broken down. Most people seem to be just going through the motions with their lives and in their workplaces. Their hearts are not in it. Even the criminals don’t try too hard to evade being caught by the police.

The one person who does seem to trust is the policeman Sotiris. He trusts blindly. When suspected criminals come to be interrogated by him, he looks over the most glaring evidence to understand their stories. ‘Can I be interrogated by you?’ asks one suspect. Sotiris concludes his interviews by tossing the case file over his shoulder onto the filing cabinet behind him: ‘Honesty is honesty – truth is beyond outlaws and the law.’

The characters of UNFAIR WORLD seem polarised between those who wear a police uniform, and those that don’t.

In contrast, Dora believes nothing people tell her – neither the honest confessions from Sotiris, nor the romantic words of her ex-boyfriend. The characters of UNFAIR WORLD seem polarised between those who wear a police uniform, and those that don’t. Both, however, commit crimes. A uniform is no barrier. That this film is set in present day Greece may lead to a straight reading of it as a commentary on the current financial and social contagion eating away at the country. Tsitos has previously said in interviews that the Greeks have blamed the state to protect them from the current crisis, and to look after the individual rather than the society as whole.

He is adamant, though, that the film is not about this. Writing began in 2003, before the crisis, and is more likely reflective of society as a whole. This happens everywhere. The world is unfair.  It will remain so unless people begin to change.

Tsitos has also spoken about the way Greek’s define their identity. His previous film PLATO’S ACADEMY (AKADIMIA PLATONOS) played upon Greek ideas of national identity as a self-defining conceit. In UNFAIR WORLD, this is done through jobs, work and status in society. For example, when Sotiris opens up to Dora and explains the situation he is in he begins with ‘I am a Policeman’, then goes on to describe a number of criminal activities he has been involved in before reasserting, ‘I am a policeman’. Similarly, Dora’s choice of clothes mirrors her status in the world – she herself lists off a number of menial jobs that she’s done previously, to portray her difficulty in self-definition.

Non-verbal communication is powerful in UNFAIR WORLD – much is said about the type of person a character is by the way they perform a simple action. The long takes and slow pace of the film allow us to observe the motivation of the characters through their actions. The film’s final scene demonstrates this beautifully – that actions not only speak louder than words, but that gestures are often less empty than promises.