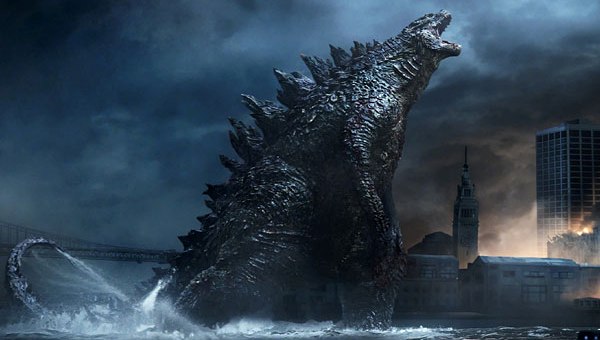 After his low-budget sci-fi drama MONSTERS became a hit on the festival circuit, director Gareth Edwards was given the job of reviving Toho’s most famous franchise, and he doesn’t stray far from his earlier film’s successful template. As before, glimpses of prehistoric behemoths lumbering across the skyline play second fiddle to the human drama taking place on the ground. At its best, this new GODZILLA delivers a big screen spectacle anchored in the real world but flecked with flourishes of Lovecraftian horror; yet its parts are more interesting than the whole.

After an ingenious opening credits sequence, delightfully skimming through the creature’s mythical history and neatly setting up a conspiratorial tone, we worryingly begin in 1999. Hollywood’s first attempt to relaunch the most famous of all kaiju came in 1998 under the auspices of INDEPENDENCE DAY director Roland Emmerich, famously under-performing both critically and commercially. Has Edwards crazily tried to redeem it with a sort of semi-sequel? Thankfully not. The less you know going in to the film the better, so suffice it to say a nuclear incident occurs in Japan, and now, fifteen years later, that incident is returning to haunt the country. Joe Brody (Bryan Cranston) is convinced the Japanese government is hiding something and gets himself arrested while trespassing in the restricted zone. His US soldier son Ford (Aaron Taylor-Johnson) is forced to fly over and bail him out, but he too is drawn in to a mystery stretching back over 60 years, and is eventually forced to join the team hunting the enormous beast.

Ishirô Honda’s 1954 original GOJIRA was less interested in the monster-wreaking-havoc action than it was with exploring the after effects of Japan’s defeat at the end of the Second World War, and specifically the legacy of the atomic bomb. Guilt and horror weighed heavily throughout the apocalyptic devastation of Tokyo. Edwards revisits those themes through the eyes of Ken Watanabe’s sombre, haunted scientist; the personification of the film’s serious-minded tone. He is all too aware that history is in danger of repeating itself. The notion that life on earth is finely balanced is raised by him more than once – too much disturbance of the equilibrium will bring retribution and counter-balance. Is Godzilla the price humanity must pay for its environmental sins?

Someone should tie Michael Bay down in a chair and force him to watch this film on a loop for a week.

One sequence in particular both stuns and terrifies. A squad of marines parachutes in to San Francisco accompanied by the discordant choral noise of György Ligeti’s “Requiem”, the same music used by Kubrick in 2001: A SPACE ODYSSEY. As they fall, the city below is engulfed in smoke and flames; a glimpse of an impossibly large beast; a lingering long shot of a city in ruins, allowing us to fully appreciate the nightmarish terror of it all. It’s like something from a Stephen King novel – a primeval vision of hell on earth.

Bravo, then, to Edwards for using unfashionably slow, steady takes in a big summer movie – this new GODZILLA is chock full of awe. By allowing the audience time to soak up the occasionally jaw-dropping imagery thrown up on screen, the impact is that much greater. He used exactly the same trick in MONSTERS; let’s hope Hollywood is paying attention. Someone should tie Michael Bay down in a chair and force him to watch this film on a loop for a week.

Fidelity to the original stretches to the treatment of Godzilla himself: fearsome and awe-inspiring, yet oddly sympathetic, with a hint of personality behind the pixels. Edwards builds suspense as he did in MONSTERS by teasing us with glimpses of the kaiju (for there are more than one) for a long time, the camera often observing their otherworldliness from close to the ground to emphasise their strangeness. Perhaps teasing too much; a little less coyness might have brought the house down on what is otherwise a slick and deadly serious blockbuster. Edwards leaves very little room for humour, which wouldn’t be a problem if the human characters weren’t so thinly sketched and forgettable. Taylor-Johnson’s nominal hero is too bland to make his presence felt, while Elizabeth Olsen and Sally Hawkins are wasted in thankless roles.

In the end, despite everyone wearing their best serious faces throughout, the family drama at the story’s centre is simply too slender and conventional to sustain interest while the creatures are off screen. That didn’t matter so much in the old films, which threw in more and more monsters as compensation, but the scripting flaws become more glaring when given as much space and treated as seriously as they are here. Still, as somebody once said, “always leave them wanting more” – a philosophy Edwards has stuck to with admirable fervour.