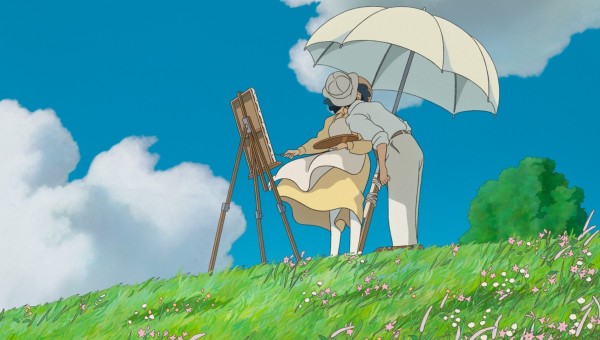 The much-publicised final film from the pencil of Hayao Miyazaki, co-founder of Japan’s Studio Ghibli, THE WIND RISES is a thing of rare and delicate beauty. A fanciful biopic of pre-war aeronautical engineer Jiro Horikoshi, this ode to the power of hard work, ambition and dreams frequently bursts with a love for art itself as the starting point for something greater. Perhaps Miyazaki found something personal to connect with in the story, but he could hardly have chosen a more suitable subject to sign off with. It’s a film that charms from beginning to end.

Starting off in his school days, Horikoshi is already obsessed with flight and aircraft. A quiet boy, his dreams (which slip in and out of the film, sometimes leaving it unclear as to what is real and what is dreamt) are preoccupied with designing aeroplanes that are faster and more powerful than anything so far built. He is visited in these dreams by the flamboyant Italian aeronautical designer Caproni, something of a hero to Jiro. He heads to Tokyo to train as a designer, briefly meeting the girl who will one day become his wife; they quickly make a connection, only to be separated by a devastating earthquake that reduces Tokyo to ruins. A chance meeting several years later sees them reconnect, but even she must take second place to his career with aircraft, the true passion of his life. As Japan struggles to compete with the west, Jiro finds his dreams and talents gradually becoming tools of the military.

Jiro is a dreamer; a geek, always searching for new ways to improve his designs

Given its basis in the real world, as opposed to the more fantastical leanings of, say, MY NEIGHBOUR TOTORO, the thought arises that perhaps this tale might have been better suited to live action, where the illusion of flight and nitty-gritty detail of aircraft design could be explored in more detail. The mixture of history, adventure and romance might suggest a David Lean-style period epic. But that train of thought is quickly expunged almost from the word go; live action surely couldn’t make the dream sequences soar with imagination as they do here, nor flit between dream and reality with such beguiling lightness. It’s a reminder that animation can be as magically cinematic as any other style of movie.

This arm’s length from reality extends to the ingenious sound design, with human voices providing sound effects for the spluttering plane engines and the terrifying earthquake sequence. It is surprisingly effective, not just at conveying the power of an engine or the awful magnitude of a quake, but also heightening the film’s dreamlike state of mind, adding layers of beauty and whimsy. Jiro is a dreamer; a geek, always searching for new ways to improve his designs, finding inspiration in the smallest of things. At one point a fish bone directly inspires a new approach to the aerodynamics of a wing. Miyazaki often dwells on quieter moments, as Jiro watches clouds drift across the sky or as he sets to work on a new design. THE WIND RISES is all about the purity and innocence of dreams.

It is also about how dreams can be corrupted by people. Jiro realises that his work is directly supporting the Japanese military in its war effort, but he seems to either be resigned to it or not much care. The appropriation of passenger aircraft for military purposes seems to him to be an unwise reversal of their intended purpose. The end point isn’t what interests him. Some have seen this as making him morally questionable, by designing weapons of war without protest. That views seems to miss the point of the story. Jiro’s heart and soul have led him to be this designer; he is inseparable from his dreams. Late on we see Jiro holding the hand of his sleeping wife with one hand while sketching with the other. That is perhaps the film’s true romance.

2 thoughts on “The Wind Rises”