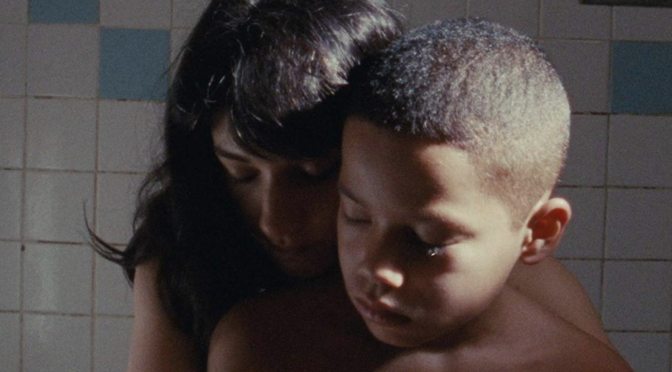 Jeremiah Zagar’s WE THE ANIMALS is a beautifully realised film that owes a great debt to a number of cinematic forebears, echoing as it does a number of narratives, cinematic approaches, and visual styles. Although this may prevent it becoming a cultural touchstone for others, it is nevertheless a rhythmic story that sweeps you into its coming-of-age tale.

The film follows three brothers growing up in upstate New York, raised by Ma (Sheila Vand) and Paps (Raúl Castillo). Paps – clearly an abusive husband – disappears early for a sizeable chunk of the establishing story. As a result, the three brothers are left to their own devices as Ma retreats within herself. Our protagonist, interacting with the story primarily through voiceover, is Jonah (Evan Rosado); clearly the most emotionally attuned and mature of the brothers, even if he is chronologically the youngest.

The style and narrative of WE THE ANIMALS is one that seems to intersect various recent features that have made impressions, on both small and large scales. The dream-like camera movement, connotative cross-cutting, and poetic voiceover recalls recent Terrence Malick films, particularly THE TREE OF LIFE (even if Zagar’s adaptation of a Justin Torres novel feels less exhausting than Malick’s original script). At the same time, in more silently contemplative moments, or scenes driven by body language, Zagar’s documentary experience seems to visually come through to intimate effect. The visual and camera style in close-up, as well as the narrative addressing Jonah’s initial understanding of sexuality, evokes MOONLIGHT, and the blending of the fabulist and childlike recalls BEASTS OF THE SOUTHERN WILD. The scenes of children thieving from shops with a team strategy even harmonises with SHOPLIFTERS, and them tearing away around local work sites would screen nicely alongside one of 2018’s breakout short films, FAUVE.

The soundtrack is at once modern and ethereal sounding, supporting the more escapist moments reflecting more of Jonah’s internal moments. Zagar manages to capture the wonderment children have, and the consequently partial understanding of adult interactions. WE THE ANIMALS retains some visual uniqueness – shot on 16mm, there are starlit scenes that are nevertheless crisp and a number of scenes use the sodium glow of streetlight to painterly effect.

Although these moments are expertly handled, in clearly echoing previous work there is, in truth, little that allows WE THE ANIMALS to stand apart. Most of those forerunners are excellent films, and as a result WE THE ANIMALS feels more like skilled cinematic cross-breeding than a new species or beast. However – when the end result is more disciplined than Malick, the narrative is as tender as Jenkins’ breakout, and Evan Rosado does for Jonah what Quvenzhané Wallis did for Hushpuppy – it is hard not to be swept up by it.