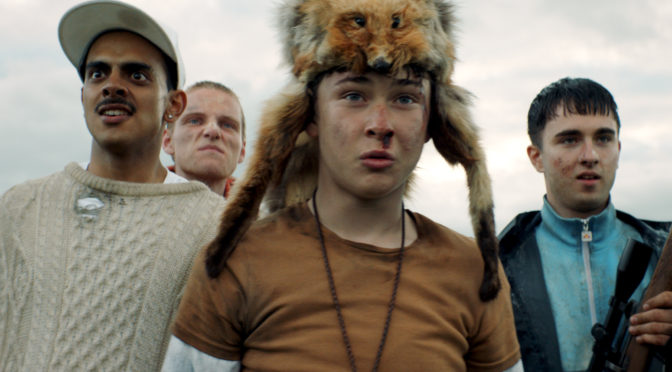 A breakneck ride through a Duke of Edinburgh expedition gone extremely wrong, Ninian Doff’s BOYZ IN THE WOOD keeps momentum behind its absurdist humour with verve and kinetic pacing.

Three kids forced to do as penance for blowing up a school toilet – Dean (Rian Gordon), Duncan (Lewis Gribben), and ‘DJ Beatroot’ (Viraj Juneja) – are joined by the more academically minded Ian (Samuel Bottomley) on the expedition portion of the Duke of Edinburgh’s Award. Introduced in a comic retro infomercial, the award is described as a way of getting “young delinquents out of the city”. Once in the Highlands, however, Ian is the only one who shows any willingness to engage in the award’s key tenets. Things take a more perilous turn when they are murderously stalked by an upper-class shooter they designate ‘the Duke’ (Eddie Izzard), set on exterminating the ‘vermin’ and controlling the population.

“BOYZ IN THE WOOD feels nitro-powered from the get-go, rapidly cutting between visual gags and character introductions based on rapid-fire delivery.”

BOYZ IN THE WOOD feels nitro-powered from the get-go, rapidly cutting between visual gags and character introductions based on rapid-fire delivery. In these segments the film feels part of the same stable as Edgar Wright’s first features after Spaced. The description of the boys’ route feels like a rural version of the route to the Winchester in SHAUN OF THE DEAD. The over-the-top action, farcical imaginations of the local police, and shady cabal of local elders recall HOT FUZZ. The social commentary based upon the disregard shown to the supposedly troublemaking kids feels akin to ATTACK THE BLOCK, by Wright’s sometime-collaborator Joe Cornish.

There is, however, some visual flair that very much belongs to director Ninian Doff alone. The visuals applied when characters partake of ‘farmer’s courage’ (hallucinogenic mushrooms eaten by rabbits, then heavily concentrated in their excrement) are inventive and funny. The ensuing nighttime farce as murderous pursuers, kids, police and farming community collide is shot fantastically, as are the numerous panoramas of the Highlands.

The most important aspect, for a film pitching itself as a comedy, is that the many jokes are, pretty uniformly, executed very well. Doff’s script has an excellent understanding of humorous callbacks, and shows great patience in paying off gags set up many scenes ago, that seemed to have already delivered their final punchline. His visual approach allows these and the growing portent to flow naturally as well despite the rat-a-tat style – early on for instance, the kinetic character introductions mean we fail to notice an ominous detail until Doff slowly zooms precisely when he wants us to notice.

“Doff’s script has an excellent understanding of humorous callbacks, and shows great patience in paying off gags set up many scenes ago, that seemed to have already delivered their final punchline.”

The satirical elements are where the film is least comfortable. Having said this, for most of the running time this is handled effectively; it’s merely the film’s conclusion that doesn’t really stick the landing. The commentary aspects of BOYZ IN THE WOOD are hardly subtle; and how could they be when Eddie Izzard is in full (and always enjoyable) Upper Class Twit mode, gallivanting around with a gun shooting at largely working-class kids? The script and leads drop in small elements, however, that add to this. DJ, full moniker ‘DJ Beatroot’, is desperately trying to blend in with his pals Duncan and Dean, and gain some credibility for his rap music, by hiding his privileged background. Dean’s derisive snort at Ian’s assertion that if “you work hard, all your dreams will come true” very easily puts across a whole backstory and character colour for each without laying out every detail. It is at the film’s conclusion where Doff’s script clearly has less – or perhaps too much – confidence in its message.

A protagonist versus antagonist ‘monologue-off’ near the end feels like a bit of a tacked-on appendage, a symptom of being unsure how to end the pursuit and counter-pursuit of the third act. The exact phraseology the characters use here doesn’t really fit with the situation at hand, and is unnecessary given the preceding 90 minutes of material which is handled much more deftly. Even in these moments, however, the film swiftly moves on, landing another callback gag.

BOYZ IN THE WOOD is a fast-paced bumper car ride, with great comic timing and a sprinkling of social awareness. The minor misfires and more scattershot moments are made up for by the number of times Ninian Doff’s film hits the bullseye dead centre.