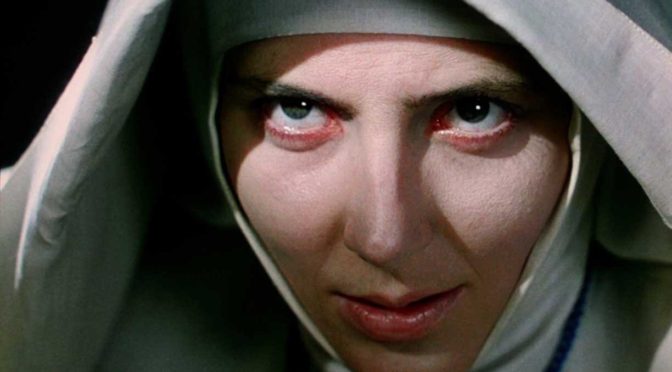 Michael Powell and Emeric Pressburger’s iconic 1947 drama revisited the big screen at this year’s Cambridge Film Festival. BLACK NARCISSUS, based on Rumer Godden’s novel of the same name, is what THE SOUND OF MUSIC would have looked like if William Friedkin had directed it; an intense and claustrophobic tale of seduction, religion and temptation.

High in the Himalayas, not far from Calcutta, Sister Superior Clodagh, played wonderfully by Deborah Kerr, leads a small group of nuns to run a new convent. Along with them, they reluctantly take Sister Ruth, played by an evocative Kathleen Byron, an unusual and reclusive Sister who the others are never quite sure how to handle.

The General, who owns the building, sends his English contact, Mr Dean, played by a shirt-phobic David Farrar, to act as host and messenger. Welcoming the nuns into their new convent, a palace previously referred to as “The House of Women,” once a place for the General’s father’s harem. A house of women it remains but with an entirely different angle.

Beautifully contrasted with the sacred and spiritual atmosphere of the convent is the tempestuous wind battering its walls and the horns of the General’s army sounding off in the mountains, surrounding St. Faith’s in an unrelenting cacophony of sound. The raging winds flit through the convent, bringing with it an “atmosphere” that the Sisters all begin to sense.

Filmed primarily at Pinewood Studios, with the odd few shots on location in West Sussex, the directorial legends still manage to capture the sheer scale of the Himalayas by using large scale paintings to create the mountainous surroundings. The film is an absolute must for fans of British Post-War cinema and perfect for those just dipping a toe into that era of film. BLACK NARCISSUS creeps along beside you until you realise something’s not quite right before, sometimes comically, leading you into an unnerving horror-verse, which slowly builds with the ringing bells and the beating of the village drums.