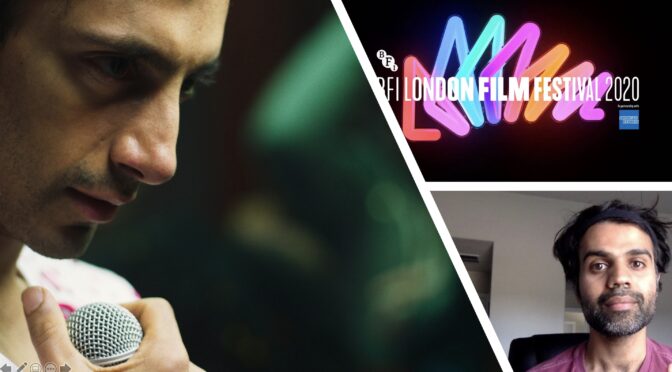 Jim Ross: So first of all, thank you for the film. I watched it a few days ago, I thought it was excellent. The first thing I want to ask you about was how you approach the film visually, because there are three different strands are represented: you’ve got these concert flashbacks where Zed is performing in front of an audience; there’s reality, obviously; and then there’s also these kind of magical realist elements – in particular, that personification of Toba Tek Singh. They’re all getting across different things to me. I was wondering, how did you approach how you wanted to shoot those different elements in terms of how you what you want to communicate about Zed’s emotions and how he was dealing with his identity? Was there a different way you approached each of those?

Bassam Tariq: Yeah, that’s a great question, man. And I think for us, really, it comes down to the great work of our editor, Adam Biskupski. Really, I think, you know, the funny thing is that the script that we wrote is really what we ended up bringing to life on screen. But I think there are elements of how he wove in some of those gems of things that just happened, like, you know, with the concert that we filmed, that we put on. Riz, he just blasts into a few new songs that were so exciting that we’re saying “We have to bring this into the film”. And I think the film also builds to a final concert. That’s the way we look at it we wanted it to be that if you saw it as like a triptych of these hallucinations and also the concert.

Jim Ross: On a different note – I’m not going to lie – I’ve come away from this film learning things. How do you envisage folk taking to the cultural references that they might not be aware of going into the film? Things such as the concept of Toba Tek Singh [and everything that follows, like] the short story with the same name, the short film read, how that relates to the 1947 partition [of India] etc. For others, obviously, it’s going to be references that they understand. But are those different ways of engaging with it part of what you were envisaging?

“…it’s a challenge. Isn’t it? When you make something that’s so specific? Is it important for everyone to know the references? I don’t think so.”

Bassam Tariq: Yeah, it’s a good question and it’s a challenge. Isn’t it? When you make something that’s so specific? Is it important for everyone to know the references? I don’t think so. I think and I hope that the real coup is that you’re able to connect to the final moments of the film. And even if you don’t know the language, and you don’t know what’s being said, then you can still connect to something. The film is giving you enough of the language needed, or the enough of the references needed, to help make sense of the final moment that you are still feeling…the exuberance? Or whatever it is in the end. And I don’t know, I don’t know if we were successful or not, but I think that’s part of the challenge of creating this kind of work, you know? I think, if you can argue – in a real universal relationship that we care about, whether it’s a father and son thing or not – the idea of running away from your own heritage, which I think all of us are, whether it’s a heritage of colonialism – that I find a lot of my English friends trying to, you know, deny or divorce themselves from – I think everyone’s heritage is complicated and complex, and it’s beautiful in its complexity. And I think, if we do start to approach it, and to really confront it, it could be something really exciting in that and all the particulars of it.

Jim Ross: I think one place where that struck me is the scene where Zed is castigated by a fan for handing him something with his was left hand. Combined with the discussion with his friends and family about shortening his name, it’s this idea that everybody has their own idea of how you adhere to your roots or cultural heritage. Is there a right way to do it? How do you deal with that when you’ve got people from a community disagreeing on how to actually express their identity and culture?

Bassam Tariq: I think that’s great, man. Like, I feel like that’s what it is. We’re all trying to figure out ways to navigate the space that we’re living in, and there’s no right or wrong way. I just think it’s fascinating that we’ll smoke a spliff, but be told “Hey, it’s really disrespectful that you did it with your left hand” – but [the fan in the film] also does it from a place of love, right? He’s correct. It’s not like a ridiculing as it is a moment of having a desire to embrace the fact that we’re all navigating these weird, no-man’s-land spaces that we’re living in.

Jim Ross: So how did you come to be involved in making the film with Riz Ahmed? How did you find that you both had the desire to convey these sort of experiences on screen?

Bassam Tariq: Yeah, we’ve been friends for a long time, man. And we’ve just been trying to figure out how to really build something that felt really true and honest to each other. And I think bringing our most honest self is sometimes the hardest thing because there’s always a desire of having a bravado – particularly as men, you know – and I think, us being able to let down those masks and just be as free as we can, is really sometimes the hardest thing. I feel like it’s a constant dance, you know, and it’s jazz. We’re all learning how to play an instrument as we’re on stage, and we’re passing it on to the next person, we’re passing it back to each other. We’re both playing instruments while we’re dancing. That’s what it really is.

“I think all of us are fighting for the same thing right now. And it’s tough out there. So I think it’s important that we’re all showing up for each other, [because] we all need this.”

Jim Ross: How have you found the festival circuit recently? You had the showing in Berlin, and that sneaked in under the wire. How have you found switching to this very strange online environment halfway through and also going on to release the film in Britain in the middle of it?

Bassam Tariq: Yeah, man, it’s wild. It’s a really wild thing. And I think the one thing that I’m trying to do is realise that we’re all figuring out how to make this work; journalists are trying to make sure that they have their jobs, we’re trying to make sure that we’re relevant. I think all of us are fighting for the same thing right now. And it’s tough out there. So I think it’s important that we’re all showing up for each other, because this isn’t just us showing up for the pressers and just for the film. It is for that but it’s also for all of us: we all need this. So we can keep these things, we can keep these experiences still happening. And perhaps the future will be more hybrid than we expected to be.

MOGUL MOWGLI is scheduled to be released in the UK on October 30th, 2020.