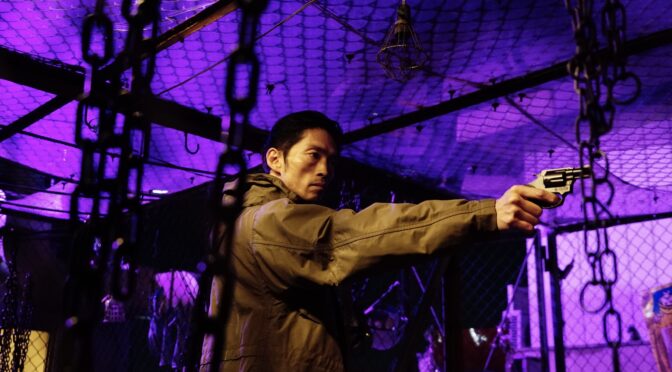 Takashi Miike’s latest film retains his eclectic mix of genre, with dark humour, ultraviolence and romance to create a bizarre yet thrilling exploration of love amidst the chaos of gang warfare.

You will be presented with a wide array of films to watch around Valentine’s Day. If you like a lighter rom-com, maybe TO ALL THE BOYS: P.S. I STILL LOVE YOU might suffice. Does a more dramatic domestic drama take your fancy? Then perhaps DOWNFALL will work. But if you’d rather watch a bunch of people hacking each other to pieces with guns, knives, katanas and their own hands while a distraught boy and girl do their best to stay alive, FIRST LOVE will be more your thing.

After being diagnosed with a brain tumour, aspiring boxer Leo (Masataka Kabota) loses his purpose in life until he meets call girl Monica (Sakurako Konishi) and becomes entangled with a corrupt cop, an assassin, and a yakuza. The opening – a familiar boxing montage – lulls us into a false sense of security, and less than three minutes pass before we witness a head flying across the screen in a sudden comic fashion. The sharp editing of Miike’s film allows him to toy with the macabre, transitioning from scenes of calm to jarring moments of gore which you’ll need a black sense of humour to appreciate fully. Many children will have fond memories of those adorable small dog toys that flip and bark, and a tense scene involving one such unlucky mutt and a piece of string is a darkly amusing highlight.

But this violence isn’t used at the expense of decent characterisation. Leo’s cancer diagnosis scene is brief but powerful and – refreshingly – the brain tumour becomes a central driving force in his subsequent violent actions, rather than an empty plot device. Short flashbacks help develop Leo’s nihilistic motivations and his monosyllabic response to a boxing interviewer that the sport is “all I can do” establishes a disinterest that will soon be cast aside as he takes down Monica’s assailants. Despite the chaos, Leo and Monica’s dysfunctional relationship provides a poignancy that keeps the plot grounded.

Masaru Nakamura’s screenplay provides odd but hilarious responses from its secondary characters, such as a woman complaining about her garments being too bloody to wear after she has murdered a man, and a cop laughing about the newfound beauty of a man’s severed head. Characters are aware of the lunacy of their situations but nonetheless revel in the chaos. The car chases are predictably insane, not only due to the speed of the editing but also Kodi Endo’s dynamic soundtrack. The adrenaline created by the electric guitar is nothing new, but the addition of booming saxophones adds a jazzy, discordant tone which exaggerates the trippy action. Nobyashu Kita’s creative cinematography comes into full force here with a colourful, disconcerting scene that briefly removes us from the film’s violent reality. As Leo remarks at one point to a distraught Monica, “It’s tough, but funny, huh?”. Yes, it is, and if you like a bit of the old ultraviolence mixed in with your romance films, FIRST LOVE is a fine choice.