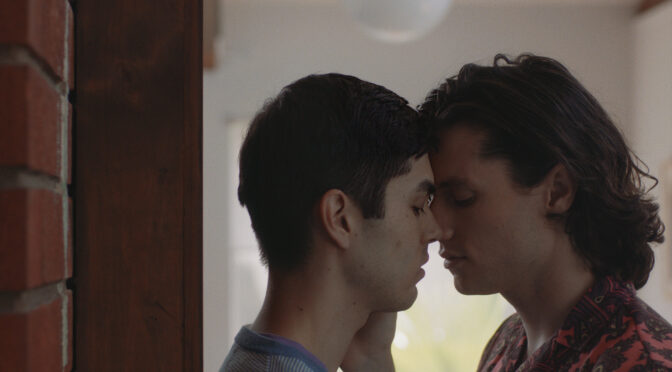 There’s a moment in STRAIGHT UP where writer-director-star James Sweeney’s Todd admits to his therapist he’s calculated the number of people he could realistically date in the Los Angeles area. He’s rounded it down first to gay or bisexual men aged 20-30, then those with a high IQ, those who are sexually compatible, those who don’t snore, have good dental hygiene, a decent movie taste…

The number is low, and Todd is neurotic, confused, with OCD compulsions which intensify the more in his head he gets. He’s an overthinker who’s managed to convince himself the solution to his bodily fluids and intimacy aversion is to date straight women instead. His friends are doubtful he could trick anyone into thinking he’s heterosexual, but he says he could “just be metro, or hipster”.

Enter Rory, a fast-talking actor played by Katie Findlay who gets fired from her waitressing job for clearly not wanting to be a waitress, to which she asks, “who the fuck wants to be a waitress?” She blazes her own trail in improv classes, often going too far off-script, but harbours a cynicism about the world, deconstructing inspirational quotes about reaching for the stars.

On paper, Todd and Rory are perfect for each other. Their meet-cute takes place at a library after she mistakes him for an employee, beginning a conversation which seemingly never ends. Sweeney’s direction is such that the dialogue comes thick and fast the way it does in millennial indie dramas, aiming to be both real and entirely fantastical, performative in how everyone is always prepared with a razor-sharp retort, which they themselves expand on and unravel through further tangents. There’s even an argument about irony. This lyrical pace borders on exhausting, sometimes less Frances Ha and more the overstimulation of one of the Lego movies. But it does serve its two leads well, their back-and-forths indicative of a love and understanding that bridges an apparent incompatibility between their sexualities.

There’s a darkness to the film’s humour which gives it a welcome edge, both in the personalities of Todd and Rory – the latter of whom replies to the question “have I seen you in anything?” with “maybe, have you seen Two Girls, One Cup?” – and in their worst-case-scenario spirals, like Todd panicking about a cancer diagnosis: “You have cancer?”, “Not yet, but I will.” To go along with how their worlds must have some sort of order, scenes are often framed Wes Anderson style) at 90-degree angles. However, Sweeney nods specifically to Kogonada’s COLUMBUS and Pawlikowski’s IDA as inspirations for the film’s style. It’s minimalist rather than austere, but scenes are memorable for just how undisturbed they are, juxtaposing the panicked inner anxieties with this outer state of calm.

It’s all of the above which stylistically sets STRAIGHT UP apart, but thematically it stands out for some daring musings on relationships. This is an LGBTQIA story insofar as that it deals with a gay-and-questioning-it lead character who’s dating a straight woman who might be fine with it because she has a complicated relationship with sex. While Todd’s friends poke fun, he and Rory do get along really well, clearly share a love for each other, and are bonded in a way they aren’t with anyone else in their lives. Instead of dwelling on romance, STRAIGHT UP is about partnership and the kind of fulfilment that can bring. Asked by his therapist whether it is sex or love that he wants, Todd says doesn’t know what he wants, but he knows what he doesn’t want, which is to be alone for the rest of his life. The film isn’t judgemental towards what Todd and Rory are doing, which ebbs and flows between something that’s been missing from both their lives and the feeling that something is still missing.

It makes for a safe space to air worries, afforded to the characters by their unique situation. When he takes Rory to see his parents, Todd wonders if they’re more proud of him than they would have been if he’d brought home a man. There’s a more existential question of life’s meanings, encouraged by having two people as introspective as each other spend a lot of time together, and letting one of them say “I have a theory that millennials overshare because we are the most Godless generation” and have it sound completely in keeping with the rest of the film. It’s very now, in that every thought is valid and encouraged, we’re more connected yet more lonely, and there’s just so much happening all the time.

There’s an audience out there who will be utterly allergic to everything about STRAIGHT UP, whether it’s the film’s aesthetics, its bordering-on-quirky characters, or its open mind (ok, boomer). But those reasons are exactly why even more will find a lot to love about it. I found it charming, tolerant, well-constructed and a pleasure to spend time with. It has something to say, and it’s saying it while it’s still relevant.