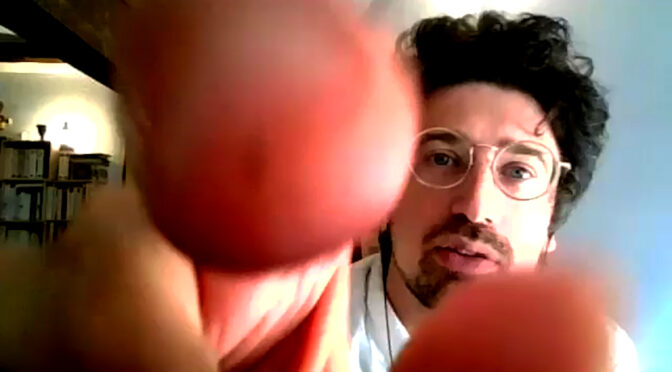 DEAR HACKER is a short documentary that brings together IT, philosophy, and occult esoterica to discuss the ubiquitous webcams towards which we point ourselves. Despite the film’s frustrating lack of resolution, it offers an interesting perspective on contemporary paranoia and the anxieties of online communication.

When Alice Lenay’s webcam started flashing red unexpectedly, she suspected a hacker was activating it to watch her. Through a series of interviews with computer technicians, philosophers, and friends, Lenay explores our relationship with webcams and how much control we really have over the eyes that watch us from the top of our screens.

Lenay’s constructs her documentary from the edited footage of her and her interviewee’s webcams, complete with the freezing, buffering, and connection issues with which we’ve all become familiar. One particularly interesting sequence shows us the raw input of a disassembled webcam without a lens to focus the light information entering it. Like an eye without a brain to interpret its data, we see abstract forms emerge as output suggesting but never defining the presence of objects.

DEAR HACKER is not the film to watch for technical advice about webcams or hackers. It skews far more towards philosophy and metaphysical speculation than to science and technology. Some appetite for French philosophising is required to enjoy the debates about the parasitical relationship between humans and hardware or its speculation on artificial networked intelligence made up of the data sent between operating systems on our global networks.

The idea of Lenay communicating with her hacker is an interesting starting point for her metaphysical investigation but ultimately doesn’t go anywhere. We’re left asking if there ever was a hacker or if Lenay interpreted a hardware glitch as a sign of a person behind it? We’re left with the feeling that, despite the horrors of modern digital surveillance, at least being surveilled makes us feel that someone is watching; that we’re important in some way. If being watched is a form of validation, then maybe it’s no coincidence that we continually point webcams at ourselves, and maybe we would be better off thinking that there’s always someone watching us.