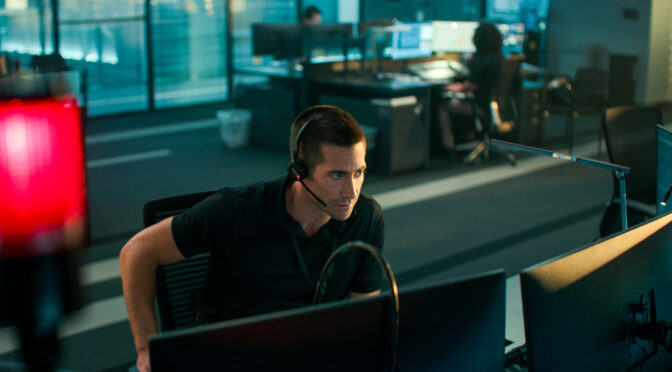 Antoine Fuqua’s adaptation of the well-received 2018 Danish thriller THE GUILTY, now starring Jake Gyllenhaal, builds tension with a dynamic visual sensibility. However, attempts to utilise that tension to develop any significant engagement with the central character or the issues at the plot’s periphery are less successful.

Gyllenhaal is the focus, of nearly every frame of the film, as Joe Baylor, an LAPD cop re-assigned to duty in a 911 dispatch centre (the claustrophobic setting for the entire film). He is dismissive of callers and simmering with frustrated male rage, relevant – as we later discover – to passing references to a pending court case against him. His demeanour is prickly until he receives a call from Emily Lighton (Riley Keough in a voice-only role). Joe ascertains she has been kidnapped and seeks to gather information from her while she maintains the pretence of calling her children. Joe then interacts with various other members of the emergency services in an attempt to find the vehicle she is in and reunite her with her children.

“The film manages to sustain a heightened atmosphere well with the limited narrative tools available.”

The film manages to sustain a heightened atmosphere well with the limited narrative tools available. The variety of camera angles deployed to capture Joe set tone and context effectively: isolating him in the frame when he is trying to ignore others in the busy call centre; placing colleagues in the front or behind when establishing those relationships; sustained close-ups when he is tense and – increasingly, as the film progresses – maniacally focused on his crusade.

When visual elements, such as the red light Joe is frequently bathed in, combine with the fragmented aspects of the story parcelled out by some engaging voice acting, the effect is engrossing. Gyllenhaal and the voice cast draw you into the drama, with Fuqua ensuring the visual elements blend with them and elevate dramatic pitch.

However, the film’s surface strengths do not seem to serve anything beyond morbid fascination. Whether this hollowness results from a lack of thematic clarity or an ill-conceived translation from the Danish original is unclear (this review being undertaken without the context of Gustav Möller’s 2018 Oscar nominee). Still, the end effect is that of a muddled and unsure film.

“However, the film’s surface strengths do not seem to serve anything beyond morbid fascination.”

Placing the film against the backdrop of California wildfires would seem to indicate a grander metaphor for the state of US law enforcement or public services, but it merely confuses the otherwise intensely personal focus of the film. Having said that, the film never meaningfully illustrates those personal motivations behind Joe’s focus on saving Emily. The mystery around his pending court case means the story cannot draw parallels, and the twists and turns the script takes – whilst undeniably gripping at points – amount to little more than sophisticated radio soap opera.

“There are plenty of elements to commend THE GUILTY, but they are fleeting. The film’s rushed conclusion also fumbles any message the film might have…”

There are plenty of elements to commend THE GUILTY, but they are fleeting. The film’s rushed conclusion also fumbles any message the film might have, with the denouement for Joe taking place in muffled radio reports over a sunlit LA cityscape. Too little is established in Joe’s character for the tension to pierce or upend our understanding of him, and the focus on him is so intense that any broader metaphors or statements fail to emerge from that dense wildfire smoke.