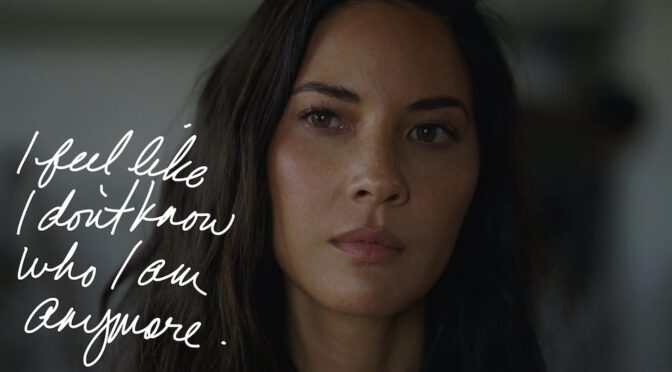 Justine Bateman’s feature debut, VIOLET, demonstrates a great deal of skill in eliciting compelling performances from the cast, especially lead Olivia Munn. However, a desire to cram stylistic flourishes into the film tempers any emotional engagement with the protagonist’s struggle.

Munn’s Violet, a film producer, finds herself doubting her capabilities and direction in her life and career. Successful on the surface, she is reluctant to pursue a romance with longtime friend Red (Luke Bracey) and professional satisfaction with a passion project (a small art film) or to assert her authority within her work environment.

Bateman presents these internal doubts via two primary forms. Firstly, via Justin Theroux’s role as the voice in Violet’s head vocalising all her worst self-assessments (continually saying “Pig!” as she chows down on a snowball). Theroux’s calmly denigrating tone, delivered in short level bursts, blends seamlessly with the dialogue and Munn’s facial expressions and body language. The second element, which clarifies Violet’s true desires that run counter to Theroux’s inhibiting influence, is on-screen handwritten text. Further, as Violet’s frustrations in certain conversations come to boiling point – a friend reminding her of abandoning the passion project, a stressful interaction with her ex – the frame gradually fills with red, elevating the clear anger metaphor to the dominant image.

“Bateman’s film is full of ideas but desperately needs to triage them to let the best of them – and Munn’s performance – breathe.”

This elevation of subtext is the film’s weakest point. Ironically, it is almost as if Bateman has succumbed to her own internal Theroux-like voice by thinking the audience can’t put together the elements she has crafted with her cast. In particular, amongst the film’s strengths is some of Munn’s best and most subtle work. The voiceover from Theroux acts as an effective counterweight, explaining Violet’s more sheepish self-assertion, but Munn’s performance struggles to break through the stylistic flourishes of text and colour. Bateman’s film is full of ideas but desperately needs to triage them to let the best of them – and Munn’s performance – breathe.

The best moments in the film are when it is stripped back to a cathartic moment for Violet, while her inner backbiter strives to undermine her once again. How much the film has to say about personal affirmation in these moments will depend on resonance with individual viewers, but the character interactions Munn drives develop the most empathy (even if many of her coworkers, particularly Dennis Boutsikaris’s company head, are just uninterestingly arrogant or annoying).

Although Bateman’s direction gets in the way of the performances she has managed to coax from the cast, there is plenty of empathy and catharsis in VIOLET. The film’s resulting relatability makes this small journey of self-reflection resonate with the voices of self-doubt in our own heads.