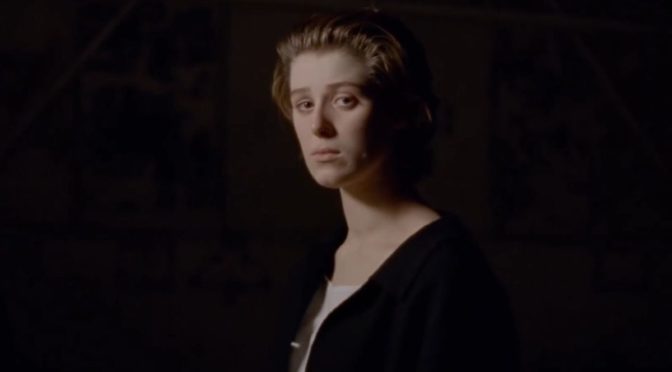 The films of British director Joanna Hogg — UNRELATED (2007), ARCHIPELAGO (2010), EXHIBITION (2013) — can be identified as hers almost instantly. Hogg has cultivated a style predicated on distance, on long-takes in which characters, alienated from each other and not too happy with themselves either, move before the gaze of her static camera, in scenes staged and blocked and acted with the acutest sense of nuance in their drama. But in THE SOUVENIR, her newest film, she begins to draw nearer to her characters; rare closeups pinpoint the attention of a scene, straight-to-camera looks register exactly what would otherwise be a suggestion in an interaction.

Hogg is closer to this material because this material is closer to her: the film is ‘semi-autobiographical’, that vaguest of terms, the director casting her critical-yet-compassionate eye toward a stand-in for her younger self. Hogg is represented by Julie (Honor Swinton Byrne), a young film student and aspiring director. She lives in an appallingly swish two-storey flat in Knightsbridge, in which Julie spends most of her time, first glimpsed in the film’s opening scene while hosting a party. Julie is planted behind her camera, observing more than partaking in proceedings. At the party, she meets Anthony (Tom Burke), and regales him with her ideas for a feature film: it’s set in Sunderland, and it focuses on a young boy who is infatuated with his mother, who represents the city of his birth. Anthony is older than she is, out in the world in a way she isn’t, a Foreign Office employee, someone who wears fine suits and declares aesthetic preferences and takes her and her work seriously; but he also demeans her, sponges off her, steals from her, gaslights her — there’s a secretive aspect to the man Julie is falling in love with, and a complicating matter which fuels this side of him: he’s a heroin addict.

“Hogg is closer to this material because this material is closer to her: the film is ‘semi-autobiographical’, that vaguest of terms, the director casting her critical-yet-compassionate eye toward a stand-in for her younger self.”

At film school, in front of a dismissive panel of mostly male instructors, Julie is questioned about her motives for making this film. Why Sunderland? She sees it as a way to escape her ‘bubble’, the privilege inherent in her upbringing. Making this film would make her confront the world, understand the reality of Thatcher’s Britain. But meeting Anthony counteracts this desire; the film falls through, and it’s probably just as well: every time she tries to speak about the project, her sentences are laced with bromides, filler-phrases, and hesitations. Without enunciating the fact, Hogg makes Julie enter into her bubble more deeply by being with Anthony. The flat’s furnishings change, a gilded bed assumes a position in her bedroom, a chandelier appears; the soundtrack to her life changes from her preferred post-punk to blasts of Anthony’s favourite early twentieth-century operas. Julie abandons her principle: the cost for her first love.

It helps that the film, through the grainy, muted qualities of David Raedeker’s cinematography, has the blanched colour of recollection. What’s more, Hogg, like Chantal Akerman (a director she idolises), avoids the dilettantish use of long-takes which is so detrimentally widespread in contemporary arthouse cinema: Hogg’s shots contain nothing extraneous, and her decision to let time pass in them lends those instances a feeling of being enshrined in remembrance. The size of the frame is also noteworthy: the 1:66 aspect ratio nearly touches the side of the screen, reflecting the almost-ness of Julie’s life at this point — she’s almost in love, almost an artist, almost in the world.

THE SOUVENIR marks Swinton Byrne’s first lead role, and it’s a remarkably subtle performance for an old-hand actor, let alone a newcomer. She plays up the halting, faltering gestures of someone passionate, but as of yet unprepared to complete the task she has set herself. Desperate to be taken seriously, as most young people with an interest in the arts are, she nods enthusiastically at every reference point, every book or film or artist brought up idly in conversation, in such a way that she virtually guarantees to her interlocutor that she’s unfamiliar with the referent. It’s also a hurt performance, the pain visible in Julie’s face is a mark of newfound resolve later in the film, and this transformation is handled and presented impeccably. Burke is astonishing, too: his Anthony has a combination of the hauteur of James Mason, the charm of Trevor Howard, and the mean-spirited elegance of George Sanders, mixed-in with something belonging solely to the actor himself. Burke’s peremptory manner, his repose, his line-readings, are all sketched to make the character instantly memorable, but Hogg’s direction also emphasises why Julie would want to be with him in the first place. They have a genial, lovely repartee, a fondness for each other’s company; when he’s not brow-beating her, his bon-mots find themselves within sumptuous paragraphs of speech, all of which Julie seems to be pondering, internalising, enjoying.

THE SOUVENIR, like all of Hogg’s films to date, pays close attention to the language the characters use. Julie’s not the first of Hogg’s characters to stumble on their lines: Tom Hiddelston’s Edward in ARCHIPELAGO trips himself up verbally whenever he’s excited by something; just as the couple in EXHIBITION will talk about anything at any length so as to not say what they mean to each other. The fastidious care Hogg’s films display with regards to the language the characters use bears more than a trace of Henry James’s influence. And yet so much of the film rests on what remains unsaid. The unsaid is crucial to the letters Anthony writes Julie. Anthony produces these elaborate, elusive and allusive pieces of writing for her (always read out while the screen is filled with the same composition, an expanse of English countryside, a trio of trees reaching up into a huge stretch of sky and cloud), always in lieu of what he can’t say to her: they flatter and beg, characterising his addiction as “the beast”, pleads with her for her love and understanding — in fact they’re almost prose genuflections.

The film’s narrative is not easy to categorise, or even describe. Rather than a chain of scenes determined by cause and effect, the film’s scenarios are rather more like significant moments in time, in which a viewer is dropped without context. Hogg trusts that those watching will pick up on the hints, and that the changes in performance do all the subtextual work needed. It’s as though the film is a series of memory-fragments: snippets of a trip to Venice unfurl through the film; intensely happy impressions punctuate, such as a day when Julie and Anthony dance around the living room, their bodies reflected in the mirror on the wall; a repeated composition, set in the palatial dining-room of the Grand Hotel, of the two guessing, narrative-making about their fellow diners. Even better is a long scene in which Richard Ayoade appears as the worst film snob the world will ever see: opining, declaring, insinuating, being insufferable.

“The film’s narrative is not easy to categorise, or even describe. Rather than a chain of scenes determined by cause and effect, the film’s scenarios are rather more like significant moments in time…”

There’s a scene late on in which the sense of THE SOUVENIR as memory is temporarily upended, and the effect achieved is plaintive. During an episode, Anthony is missing, and Julie’s mother, Rosalind (played by Tilda Swinton: Swinton Byrne’s actual mother, made up to look a wee bit like Elizabeth II) stays with her at the flat. Both are sick with worry, Julie for Anthony’s safety, Rosalind for Julie’s experience. Julie decides to go down to the front of the building and post a note on the door should he come back safely; the camera stays with Rosalind, framing her through a door, as she waits during the short while her daughter is gone. The painfulness of these elongated seconds is due to the momentary change in perspective: by giving this character, only seen in snatches up this point, the space to fear and worry, the film’s emotional music is opened out an important note.

The film’s title references Jean-Honoré Fragonard’s 1778 painting of a young woman carving her lover’s initial into a tree. Julie has her own way of declaring her love for Anthony, perhaps just as permanently as scoring the letters in bark: making a film. THE SOUVENIR’s last two shots announce, in fiendishly complex and bravura ways, Julie’s arrival at artistic sureness and her readiness to enter the world fully. The penultimate shot is an astounding, symphonic translation of a sophisticated visual idea. Julie is making her film in a soundstage; an actor sits on a stool to the left of the frame reciting Christina Rossetti’s poem “When I Am Dead, My Dearest”, lit with golds intruding upon the darkness like in a Caravaggio painting — Julie is to the right, weeping. The camera is slowly dollying towards Julie, just as, in the film she is directing, the students are pushing their camera towards the actor. The two dolly shots overlap; the camera stops, and Julie looks into the lens – yet Hogg unbelievably has more. The doors to the sound-stage — which, it should be stated, almost all of THE SOUVENIR itself is built, staged, and filmed in, excepting some location footage — slide across, and Julie’s silhouetted figure steps out into the world, reversing the thesis of the famous exclusionary shot of John Wayne in THE SEARCHERS (1956). The film’s intricate negotiations of fiction and reality are given the grandeur they deserve in these final minutes: and it’s an act of pure exhilaration.

One thought on “The Souvenir”