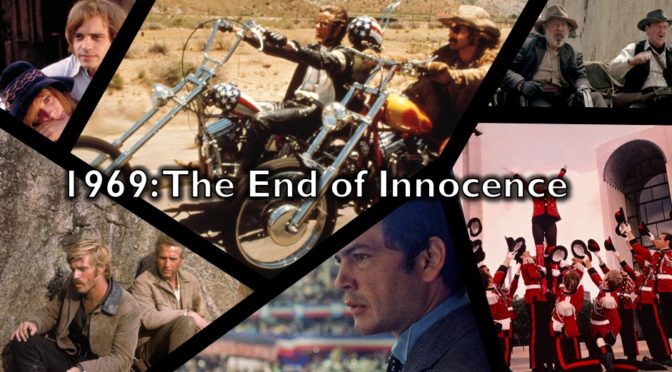 In countless ways, 1969 was the death of the sixties. Not only was it the closing chapter of the decade, it was the death of the love generation. The death of a dream. By 1969 the idealistic and aspirational ideology of ‘peace and love’ had descended into nihilistic violence and social disorder. As the seventies loomed and promised reactionary conservatism, the final year of the sixties was its most pivotal – a final primal howl of fury and anguish.

Nowhere was this more visible than in the cinema of that year. 1969 saw seismic shifts in Hollywood and the film industry at large, as flailing studios greenlit outsider projects in the desperate hope of securing financial stability, an entire generation of hungry and impassioned filmmakers infiltrated the studio system, changing cinema forever.

This year, the Glasgow Film Festival will celebrate this incendiary year in film with a host of film screenings. Within the ranks of films being showcased are household classic titles such as THE WILD BUNCH, EASY RIDER and MIDNIGHT COWBOY, as well as a litany of less celebrated films like MEDIUM COOL, SWEET CHARITY and ALICE’S RESTAURANT. Together these titles create an oeuvre of 1969 which embodies the ideology, sentiment and psyche which propelled these films towards popularity and notoriety.

Where Golden Age Hollywood had always sought to offer sanctuary from reality and a discernible distance from the world audiences inhabited, the shift that occurred during the 1960s narrowed the divide between reality and the spectacle on screen. With young filmmakers equipped with a guerrilla, DIY approach and acculturated by European New Wave, Hollywood underwent a transformation. As society grew increasingly more violent, gratuitous and frightening, cinema for the first time began to represent real life in an authentic and truthful way.

“… cinema for the first time began to represent real life in an authentic and truthful way.”

This landmark slew of films ushered in a new era defined by amorality, sexual liberation, nihilism and violence. It polarised audiences and eviscerated the moral bedrock of America. The sanctuary and safety that the movie theatre once provided was no more. This new countercultural, sacrilegious cinema alienated and marginalised the nuclear family, which had long been the core demographic upon which the studio box-office had relied. Without the family audience, box-office numbers plummeted, and to prevent this race to the bottom, the films grew evermore challenging, provocative and obtuse.

However, despite the financial precariousness of this new Hollywood era, it was a time of great invention, creativity and innovation. Films such as BUTCH CASSIDY AND THE SUNDANCE KID reinvented and reinvigorated the timeworn Western genre and spoke unequivocally to a new generation. Characterised by a certain grit and physicality which was formerly absent from big studio pictures, these films depicted a recognisable America far more accessible and relatable to contemporary life.

The films of 1969 are incomparably socially urgent, ideologically driven, idealistic tales of outliers and outsiders existing on the farthest margins of American society. They reflect the growing social destitution many American’s were experiencing and capture – rather impressionistically – the mood and imagination of the time. Many of these films such as EASY RIDER subverted and inverted the conventions of Hollywood genre cinema to challenge social stasis and rigidity. They also deconstruct the revisionist American mythos that permeates much of its golden age. The films of 1969 are all in their own way politically volatile and their potency hasn’t diminished at all– in fact they are sadly more relevant than ever.

“This selection of films encapsulates a world in transition, a cinema untethered and off course. Caught between the Golden Age studio era and the mid-seventies blockbuster boom that would rescue Hollywood from oblivion.”

This selection of films encapsulates a world in transition, a cinema untethered and off course. Caught between the Golden Age studio era and the mid-seventies blockbuster boom that would rescue Hollywood from oblivion. Once Spielberg and George Lucas discovered the formula for making immensely lucrative, high-concept event cinema, they redefined Hollywood overnight. The demand for auteur pictures rapidly diminished and the New Hollywood era ended abruptly. However, despite its brevity, this era of filmmaking is still regarded as the pinnacle of Hollywood filmmaking. The influence of these filmmakers is omnipresent today, with contemporary directors still indebted to their artistic contribution.

In those shaky and perilous interim years (1966-1975) when Hollywood for the first time was in real crisis, a new kind of cinema emerged, lead by visionary filmmakers. It was pure, uncalculated and wild. 1969 was the apex of this lurid cinematic chapter. It was the first and last time Hollywood flirted with real danger. It was the last time Hollywood was unpredictable and truly exciting.

You can find full details of the film’s playing in the 1969: The End of Innonence strand here.