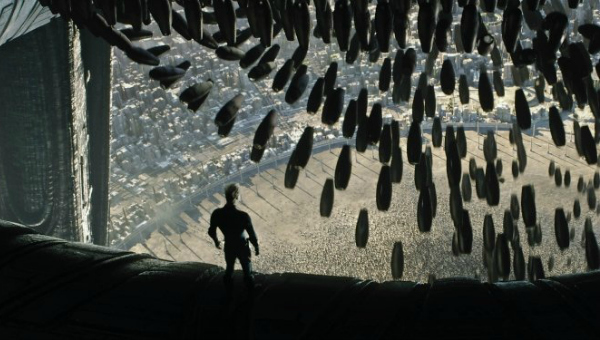 Remember how Sam Mendes’ SPECTRE felt like it was trying to be both a sequel to every Daniel Craig-era 007 entry as well as a big fat homage to the entire Bond franchise, but failed to do justice to any of them?

That sense of grasping overreach pervades much of director Ridley Scott’s newest slice of sci-fi horror, ALIEN: COVENANT. Intent on serving as both a sequel to previous entry PROMETHEUS (the sort-of-but-not-quite prequel to Scott’s original ALIEN) and a more traditional standalone entry in the canon, COVENANT tries to have its cake and eat it; the end result feels like a film with a personality crisis, with neither the scale and ambition of the former or the gut-wrenching chills of the latter. What’s left is a modestly entertaining excursion into familiar genre territory, which comes up short next to Scott’s classic, as well as James Cameron’s ALIENS and arguably David Fincher’s unfairly maligned ALIEN 3.

Things start promisingly enough in traditional ALIEN fashion, with the crew of a colony ship on its way to a promising new world being rudely awakened from hypersleep. The tragic result, along with the discovery of a random radio transmission, forces the crew – led by captain Billy Crudup, with second in command Katherine Waterstone and android Walter (Michael Fassbinder) along for the ride – to divert to a different planet, one which initially seems to have better prospects than their original target. Here they​ locate David (Fassbender again), the surviving member of the Prometheus mission, at which point things go predictably downhill for the would-be colonists.

COVENANT doesn’t have the courage of its convictions, settling instead for tired horror conventions and quick deaths…

There is a perceptible lack of interest on Scott’s part in the more traditional elements of the film: the crowd-pleasing sequences set in the dark, creepy corridors of a space vessel are perfunctory at best, with dull dialogue and paint-by-numbers action. There’s little of the slow-burning menace or atmosphere of ALIEN, or even any of its sequels, and the plentiful nods and winks to earlier films merely underline the general lack of inspiration (though resurrecting Jerry Goldsmith’s haunting score is a welcome touch). One might expect that from a director less invested in such a long-running series, but coming from Scott it’s a big disappointment.

It’s clear the director is far more interested in the PROMETHEUS plot strands about the origins of the human species and the motivations of android David, whose respect for human authority was rather open to question by the end of that film. Ideas around the nature of God, the relationship between creator and creation, are tentatively raised, only to get lost in the rush to bring on the blood and gore. The opening scene, where David first meets his maker (a cameoing Guy Pearce), sets up a potentially intriguing conflict within David, but COVENANT doesn’t have the courage of its convictions, settling instead for tired horror conventions and quick deaths, however expertly polished by Scott’s professionalism they may be. More troublingly, the convoluted plot, building on the flawed foundations of PROMETHEUS, takes much of the dark mystery away from the title creatures themselves; shining a light on their history only robs them of their nightmarish quality. Who asked for that?

Yet Scott is too consummate a filmmaker to turn in a work entirely devoid of interest. The script may let him down, but he still orchestrates the chaos with vim: two standout scenes, both on the planet (think crops and cranes), certainly quicken the pulse, and his cast do their best with what they have. Fassbender is the standout: playing two androids with identical looks yet noticeably different personalities, he’s clearly enjoying himself. That’s fine to a point, but his character is now overshadowing the Xenomorphs themselves. David has become a stock Hollywood bad guy; a Hannibal Lector figure, the devilish puppeteer pulling strings with a smile. It might be fun, but he pales in comparison with the scariest bad guys in the business whose film he has commandeered. Next time, perhaps Scott (or whoever succeeds him) should follow the ‘less is more’ approach.