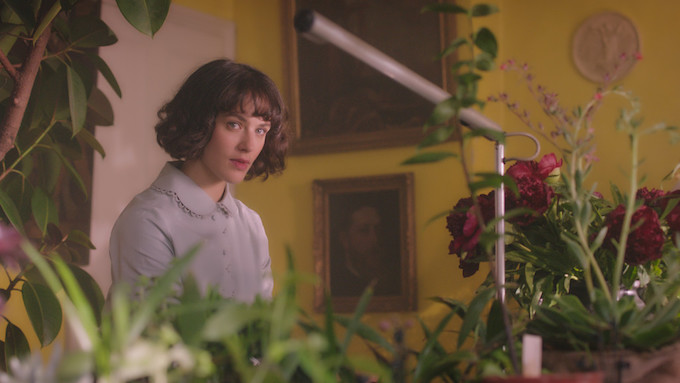 THIS BEAUTIFUL FANTASTIC opens with a voiced over monologue that partway through declares “Why am I wasting your time with all this tittle tattle?” It’s not much clearer 90 minutes later when the credits roll on a film that – although not without charm – feels like the cinematic equivalent of a person so nice it irritates you and just feels awkward.

Jessica Brown Findlay plays Bella Brown, abandoned as an infant and kept warm by ducks to survive, who has grown up afraid of the outdoors and with OCD tendencies. After being castigated by her neighbour Alfie (Tom Wilkinson) for her messy garden, she then faces eviction if she doesn’t overcome her plant-based fears to sort it out. Helping is Alfie’s cook Vernon (Andrew Scott), while Bella pines over Billy (Jeremy Irvine), a young inventor who frequents the library she works at.

From the off THIS BEAUTIFUL FANTASTIC pitches itself as being so light and whimsical it could float away. Bella appears to have mild agoraphobia and crippling OCD, leading her to impending homelessness, but is presented here with twinkly piano soundtracks as adorable quirks.

…pitches itself as being so light and whimsical it could float away.

Although she is given little to work with, Jessica Brown Findlay does the best with her Bella, giving some great comic timing and wit to her lines, particularly in her early exchanges with Scott’s Vernon. The rest of her surrounding characters are not able to escape this lightness that quickly turns into a vacuum of substance.

Despite that early wit, Vernon barges his way into this single woman’s home despite her protestations, but it’s apparently fine because he has two cute ginger children and makes breakfast. Billy the inventor is perhaps the most infuriatingly British version of a Manic Pixie Dream Boy, floating around like some low rent tea-drinking hipster version Doc Brown whilst asking Bella to tell stories about his mechanical bird. Alfie gives Bella his gardening advice in letters, despite living next f****** door.

Ostensibly all the characters grow from their experiences in the story. However, beyond Bella learning that if she keeps the garden very nice, she’ll be rewarded with free property and people magically becoming not-a-dick after decades of contrary evidence it’s not clear how anyone else does.

One particular aspect of the finale seems unwarranted, one last attempt to row back and give some gravity to the story…

Any hint of depth is not built upon. Alfie’s tales of his wife are given one short outing, despite being the most interesting thing he engages with Bella about. The bond between Bella and Vernon doesn’t go beyond breakfast, despite the wasted potential of Jessica Brown Findlay and Andrew Scott’s early interactions. One particular aspect of the finale seems unwarranted, one last attempt to row back and give some gravity to the story, but the air has escaped from the balloon by then – lost to the drive of being whimsical and nice.

Even the title evokes the approach being taken, but the characters are not relatable and likeable enough to pull such a thin atmosphere off. All the actors are talented, but there’s nothing to bite on to. This empty lacking. This quirky cutesy. This sugary syrupy. This irksome irritating. THIS BEAUTIFUL FANTASTIC.