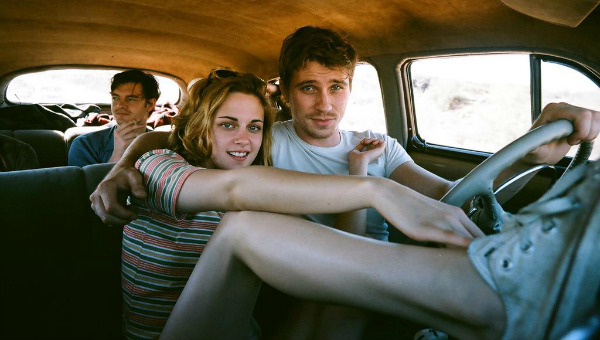 Walter Salles’ adaptation of ON THE ROAD is an intoxicating but frustrating film. Similar to the characters – drawn like moths to the flame of Dean Moriarty, the muse at the centre of Jack Kerouac’s original novel – chances are you will be drawn in by the visual and aural hedonism. You’ll ignore the self-indulgence and lack of control – but only up to a point.

The film follows Sal (Sam Riley), an avatar for Kerouac, across his many road adventures with his eclectic collection of Beat Generation friends. The fulcrum around which their youthful indulgences pivot is the Bacchanalian Dean (Garrett Hedlund). Across time and locations, connections are formed, broken and repaired as numerous people eventually move on and reject Dean – including Sal himself.

Kristen Stewart crams more sexual tension, energy and release into her performance as Marylou than all her previous work combined.

There is much to like in ON THE ROAD, Walter Salles’ second adaptation of a famous road story (the first being THE MOTORCYCLE DIARIES in 2004). Eric Gautier’s cinematography almost has a humid look in summer scenes, and you expect frost to develop on the screen in winter. In addition, some wonderful camera work and framing in linking passages give the film a sense of momentum, often compensating for the lack of a narrative vector. The acting is strong, with Hedlund and Riley (previously wonderful in CONTROL) proving capable leads – even if they are shown up a bit by the sporadic appearances of Viggo Mortensen. Kristen Stewart also crams more sexual tension, energy and release into her performance as Marylou than all her previous work combined.

The acting is strong, […] even if they are shown up a bit by the sporadic appearances of Viggo Mortensen.

Much like Kerouac’s impulsive and unconstrained prose, however, ON THE ROAD rarely slows down to pull over. ON THE ROAD, as a result, does not necessarily make for a film with a satisfying narrative. When we are left to linger with Sal and Dean there is an engagingly hypnotic quality to their personas and musings – but the journey to each point is muddled. To the language of cinema, Kerouac’s book is perhaps the equivalent of a word without a literal translation. Salles can articulate the story on screen, but he can’t quite retain the elegance of the native form.