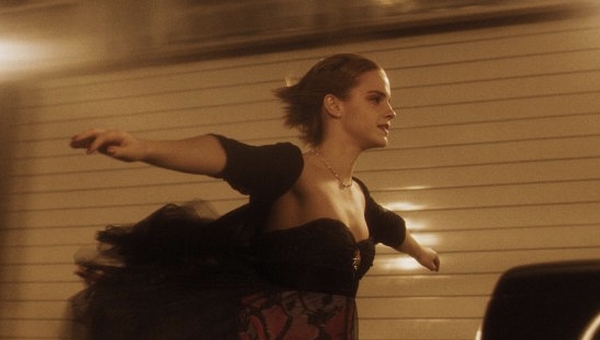 THE PERKS OF BEING A WALLFLOWER is unusual in that Stephen Chbosky has not only drafted the screenplay for the adaptation of his 1999 novel, but is behind the camera as well. Blessed with an outstanding trio of performances from the leads, although Chbosky’s drama threatens to tip over into a prosaically muddled film, the mostly sharp dialogue and excellent acting result in a sincere, humorous but still darkly emotionally slice of adolescent life.

Logan Lerman stars as the emotionally tangled Charlie – the classic perennial outsider, about to start high school in the 1990s after a difficult and, for reasons not immediately made clear, deeply traumatic summer. He documents his return to the teenage hothouse through the writing of unsent letters to a ‘friend’. However, he finds companionship in half siblings and final-year students Patrick (Ezra Miller) and the transfixing Sam (Emma Watson). Along with their collection of friends, they lift him out of his muted existence but these new relationships brings their own dramas.

The acting from all three young leads is extremely good, with Ezra Miller a particular standout. Miller is quickly turning in to one of the most accomplished and interesting actors of his generation.

The acting from all three young leads is extremely good, with Ezra Miller a particular standout. Between his recurring role in the early series of Californication and his towering performance in WE NEED TO TALK ABOUT KEVIN, Miller seems intent on cornering the acting market of each age range as he moves through them. His flamboyant and insightful Patrick is perfectly pitched – although on the surface he is precociously wise and possessing of sharp wit, the writing of Chbosky and performance of Miller still manage to convey a deep well of adolescent vulnerability beneath that. Miller is quickly turning in to one of the most accomplished and interesting actors of his generation.

Lerman does much to imbue Charlie with the sort of wide-eyed earnestness that draws us in to his shy and retiring manner, as well as selling the more archetypal characters around him, such as Emma Watson’s Sam. This isn’t a slight on Watson, whose humble confidence does much to sell the attractive qualities of Sam. The role is really just an indie-film style iteration on the catalytic female character – helping the lead to discover life and all its bewildering and bittersweet delights. She listens to The Smiths, loves Bowie intuitively and buys guys she likes typewriters – we’ve walked this road before. However, in her first major role beyond Hermione Granger, Watson shows she has some range and the potential to grow as an actress. Having said this, as much as it works here, can we stop having films with people who didn’t grow up with The Smiths talking about how cool they are? I like to think everyone did it the same way as me: hate them until you hit your twenties, at which point you suddenly ‘get’ it and pretend you liked them all along.

Chbosky’s film captures many of the feelings that can engulf the adolescent mind – everything being the end of the world; outward confidence masking crippling personal confusion; the possibilities laid out before you being a both a myriad of opportunities and paralysing range of huge decisions. The tone also fits perfectly, in a strange sort of John-Hughes-meets-Cameron-Crowe type way. The film is far, far darker in tone than the promotion might indicate.

The film isn’t perfect, and feels a bit flabby in places, but captures a universal adolescent experience – whilst also maintaining a revelatory story individual to its central character. THE PERKS OF BEING A WALLFLOWER will speak to the inner adolescent in everyone, and any teenagers could end up thinking the film was made especially for them.