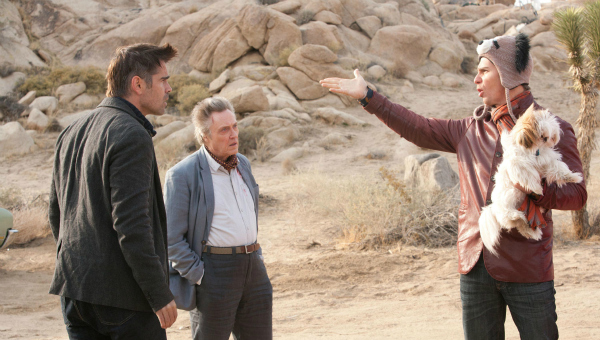 Martin McDonagh’s IN BRUGES came as something of a surprise in 2008. Despite the largely uninspiring title, and the hit-and-miss Colin Farrell in the lead, it turned out to be a dark, sharp and profane comedy. After writing several plays, McDonagh is now back with the more testosto-sounding SEVEN PSYCHOPATHS. Although this incredibly disjointed gambol never hits the heights of IN BRUGES, and isn’t as clever as it purports to be, McDonagh channels Tarantino and the Coens in creating a genuinely funny bundle of meta-movie laughs.

Colin Farrell plays the struggling Irish screenwriter Marty, whose script ‘Seven Psychopaths’ is ‘in development’; which means he basically has nothing but the title. Trying to inspire Marty, and to avoid having him slip into alcoholism, is his best friend Billy Bickle, played by Sam Rockwell in full-on eccentric mode. His idea of a great way to break the writer’s block is to place an advert for psychopaths in the local paper. Billy also runs a money-spinning dog-napping operation with Hans Kieslowski (Christopher Walken). The trio’s lives become a lot more complicated when the ‘wrong dog’ is kidnapped: a Shih Tzu belonging to psychopathic mob boss Woody Harrelson. To pretend there is much plot beyond that would be disingenuous, but it’s more about the individual turns on the journey than the overall route.

Both Walken and Rockwell seem to border on self-parody throughout, but playing with your expectations of the pair is part of the framework.

SEVEN PSYCHOPATHS is an extremely self-conscious film (even the surnames of Rockwell and Walken’s characters have film culture nods). Throughout, Marty declares his film will be different to most conventional Hollywood fare, and decries the excessive violence in popular cinema. Subverting this nicely is Christopher Walken, a man who forever seems on the point of eccentric violence (witness Donald Cammell’s WILD SIDE for some perfect evidence of why you might expect that), playing a pacifist. Both Walken and Rockwell seem to border on self-parody throughout, but playing with your expectations of the pair is part of the framework. A character study driven by method actors is really not what one should expect from SEVEN PSYCHOPATHS. However, the film is walking a very fine line – taking the piss out of lazy Hollywood tropes whilst trying to remain sharp enough to wittily employ some itself – and without seemingly covering up narrative hubris.

At all points the film feels like it may collapse upon itself, but the house of cards remains standing. Where a problem perhaps does arise is that it doesn’t say much of interest about what it is aping. McDonagh has been compared with Tarantino before, but here we can add a little bit of ADAPTATION with a dash of the Coens. The delightfully preposterous shaggy-dog nature of the story echoes THE BIG LEBOWSKI in its collection of wit, drama and the mundane. The script flirts with different realities extremely well. The visuals jump between ‘real-life’ events and the imaginings of Marty, as he tries to cobble together his psychotic septet on paper, putting different and interesting spins on aspects of the story.

At all points the film feels like it may collapse upon itself, but the house of cards remains standing.

However, as much as you may laugh, the film never quite shakes the feeling that it isn’t standing on its own feet as IN BRUGES did, with its coarse slice of Mamet-inspired criminality. It lacks the irreverent homage of Tarantino, the subversive wit of the Coens or the delicate surrealism of Kaufman. You could argue the tone is one of snark rather than satirical wit, and the movie perhaps lacks a lasting impact as a result. The characters all sound rather like different angles of McDonagh’s voice, and lack a bit of variety even if he maintains an ear for humorous dialogue. That being said, Farrell is the best he has been since IN BRUGES, Harrelson is pitch perfect as the violent Charlie and McDonagh’s physical skill with a camera has visibly grown since his 2008 debut. The characters may talk with one voice, but it’s a perceptive and funny one.

When the end result is quite as funny and off-the-wall as this, and the actors all quite as engaging and sharp, it’s rather hard to care about the lack of lasting impact. Often, when a comedian or actor is inherently entertaining it’s said you could ‘listen to them read out the phonebook’. This is the feeling SEVEN PSYCHOPATHS gives you – it’s so inherently entertaining and funny, it gets away with reading out a metaphorical phonebook.